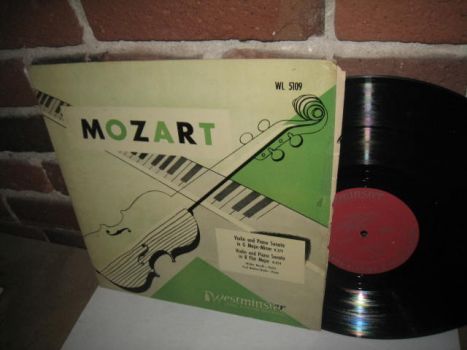 
Walter Barylli is an Austrian violinist who had a distinguished career based in his native Vienna, as Konzertmeister of the Vienna Philharmonic Orchestra, founder and leader of the Barylli string quartet, and Professor of violin at the Vienna City Academy.

In 1936 Barylli gave his first public performance as a soloist in Munich, and made his first gramophone recordings in Berlin. Over the next two years he made an international career as a soloist. F. Mairecker advised him that in autumn 1938 a first violin desk would become available with the Vienna Philharmonic. Travelling to the audition at Vienna by train from Stuttgart on 12 March 1938 he became aware of the preparations for the invasion of Austria and realised he must make his career with an orchestra rather than as a travelling soloist: he won the place and became a member of the VPO.

During the War he first brought the Barylli Quartet together. He re-founded it in 1945, but its life in public performance lay mainly between 1951 and 1960. The group became the 'home' quartet of the Vienna Musikverein. They performed in Europe and overseas, and made several appearances at the Salzburg Festivals. The group concentrated on classic repertoire, especially Beethoven, Mozart, Schumann, Schubert and Brahms.

He won first prize in the Austrian Music Competition in 1947. In 1949, he performed with distinguished conductors like Wilhelm Furtwängler and Herbert von Karajan. He has specialized in works of Mozart, Beethoven and Schubert, but has an extensive repertoire, and has made numerous recordings, including more than 200 LPs. Together with his wife Eva Badura-Skoda, he has also produced musical scholarship of impressive quality. The Badura-Skodas edited one of the volumes of Mozart's piano concertos for the Neue Mozart-Ausgabe (Serie V/Werkgruppe 15/Band 5, consisting of K. 453, 456, and 459).

This passage casts interesting light on the status of the violin and piano duo sonata in Mozart's time, making it clear that the violin part was still looked upon as essentially an accompaniment to the keyboard part. Despite this clear suggestion of the dominance of the keyboard part, Mozart's sonatas were in reality increasingly working toward a greater degree of equality between the two instruments.

The sonata was written for a violin virtuoso Regina Strinasacchi of Mantua to be performed by them together at a concert in the Kärntnerthor Theater in Vienna on April 29, 1784. Although Mozart had the piano part securely in his head, he did not give himself enough time to write it out, and thus it was performed with a sheet of blank music paper in front of him in order to fool the audience. According to a story told by his widow Constanze Mozart, the Emperor Joseph II saw the empty sheet music through his opera glasses and sent for the composer with his manuscript during which time Mozart had to confess the truth, although that is likely to have amused the monarch rather than cause his irritation.

The work consists of three movements:

The sonata opens with an exceptionally slow introduction, in which emphasis is put on the equality of the two instruments, kept throughout the entire work. The second movement has a melodic feeling of adagio, which was the tempo written down by Mozart at first, but then crossed out and marked Andante. In the development section there are bold chromatic modulations. The final movement returns to the playful mood of the first, but even so happens to be a very sophisticated Rondo.
More Information
Please sign in with your email address or Create an Account.
New Products
Compare Products
Compare
Clear All
You have no items to compare.
My Wish List
Last Added Items
Go to Wish List
You have no items in your wish list.
Vinyl Records Vancouver
Categories
Help
Quick Link
Newsletter