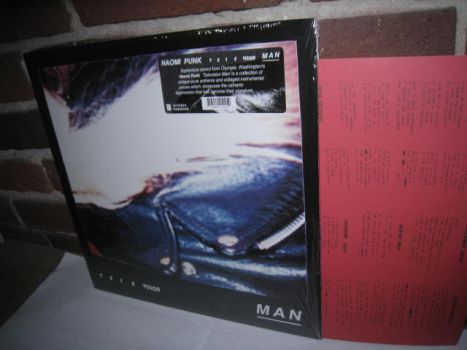 Commencing their breakout 2012 debut The Feeling, Naomi Punk return to the fold with their sophomore record, Television Man - their first for Captured Tracks. A key fixture in the Northwest DIY punk scene, Naomi Punk channel a similar energy to their contemporaries (Milk Music, Broken Water, Vexx, Gag) and their fore bearers (Wipers, Dead Moon, Nirvana) while cultivating a body of work and aesthetic that is wholly their own.

How can you describe Seattle's Naomi Punk? A musical weapon of mass destruction that's equal parts grimy art punk and caustic garage metal, few bands since the '90s have so unabashedly disintegrated the veneer of modern rock music.

On their newest, Television Man, Naomi Punk continue their hollowed out punk rampage with snarling and often unintelligible vocals and savvy if not sloppy instrumentals.

Your first basement show? That is this album. That time in 2001 when your cousin opened up for The Hives at some shitty hole in the wall and bought all of your underage friends beers? That's this album. In fact, this album is every dirty, alienating, and warmly reaffirming moment in underground punk history.

Tracks build up and fall like a litter pile over-stacked with pieces of trash, falling away in an almost hypnotic game of guitar-and-drum roshambo. And while it's easy to imagine this sound fitting in perfectly in a sludge-encrusted skramz house tucked away in the projects of some barely urban college town, there's somehow a distinct professionalism in the tracks.

Naomi Punk excels at composing engrossing bits of noisy punk in the favourable three-minute interval. While longer than the typical Bandcamp skramz jam, which typically occupies the gasp of an airless 30 seconds, the tracks manage to feel exactly the correct length.

The combination of accessibility and subversion make for an album that deceptively hides its simplicity. Sure, Television Man runs the gambit of low-fi clichés, whether it be the VHS tape background theme 'Plastic World no. 6' or the shambling hotbox joint 'Eleven Inches', but the tunes are so invasive and fun that it's hard to fault it.

Naomi Punk does what other modern art punk acts fail to do--instead of throwing together a series of influences they instead become them. Television Man could easily be a long-lost classic from the late '90s garage scene, or even early '90s pre-grunge punk era. There's no facade or pretence in the sound, no sense of knowing or apprehension in what that sound could be. Instead, Naomi Punk offer up 25 minutes of balls-to-the-walls rock 'n roll.

Ten tracks of beer-soaked bar-floor bliss, Television Man sweats through with an octane of badassery that's hard to come by these days. And while it's far from album of the year material, it probably is one of the best rock 'n roll recordings to bless the scene in a long time.