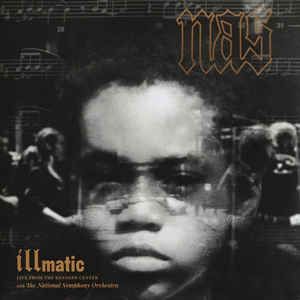 gold embossed gatefold jacket and also includes a 24×36” 2-sided poster, a booklet with exclusive photos, and a digital download card

B1 The World Is Yours
B2 Halftime

This historic performance was recorded live in March 2014 for One Mic Hip Hop Culture Worldwide Festival at the John F. Kennedy Center for the Performing Arts in Washington, D.C.

" In the performance, his most popular songs “N.Y. State of Mind,” “The World Is Yours,” “Memory Lane (Sittin’ in Da Park)” and “It Ain’t Hard to Tell” were reinvented using classical sounds.

“It’s crazy, you know, I wrote this in the projects in New York City. Here we are in the capital of America, Washington, DC, and, you know, a bunch of white people with strings and all that, playing this album, and they feeling it,” the award-winning rapper told PBS during on-stage rehearsal.

Of course, the hype feeling was mutual!

“This was the first time, as a classical orchestra conductor, I was going to branch out into the realm of doing hip hop music and rap music," National Symphony Orchestra Principal Pops Conductor Steven Reineke said, "And the idea of finally tackling this genre was something I was really looking forward to do."