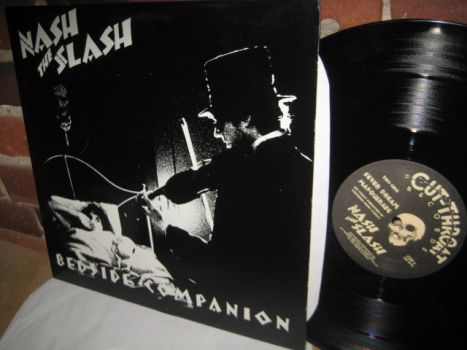 
Four song 12-inch EP titled Bedside Companion instead, on his own label, Cut-throat Records, which he continues to operate to the present day.
Nash the Slash (born Jeff Plewman on 26 March 1948) is a Canadian musician. Though a multi-instrumentalist, he is known primarily for playing electric violin and mandolin, as well as harmonica, keyboards, glockenspiel, and other instruments (sometimes described as "devices" on album notes).


Nash the Slash has been creating his unique concept of sound and vision for over twenty years. His first live presentation of music to film was a performance to the surreal silent film Un Chien Andalou at the Roxy Theatre in Toronto.

Nash the Slash was born of silent film. The name comes from a killer butler encountered by Laurel and Hardy in their first film, Do Detectives Think (1927). Nash the musician has gone on to create the music scores for such recent cult films as Roadkill and Highway 61, both directed by Bruce McDonald.

Between experiments with film and music, Nash the Slash became a familiar name to music fans through his association with the pop electronic group FM. Having co-written the hit songs Phasors on Stun and Just Like You,
Nash worked as a solo artist beginning in 1975, then founded the progressive rock band FM in 1976. After it recorded one album, he left in 1977 to resume his solo career, which he relaunched in February 1978. (It was not until after Nash's departure that the album became widely issued and promoted, eventually charting and receiving a gold record award.
He later rejoined FM from 1983 to 1996, concurrent with his solo work which continues to the present day.


Nash established his credibility as a versatile artist. His talents have been recognized with a U-KNOW (later called CASBY) award for best instrumental artist as well as a Juno nomination for best new male vocalist.

Nash's profile was raised on the international stage when he toured the world with the likes of Gary Numan and Iggy Pop. Other high-profile shows include opening for The Who at C.N.E. Stadium in Toronto to a crowd of 70,000 people and opening for The Tubes at a sold-out Maple Leaf Gardens.