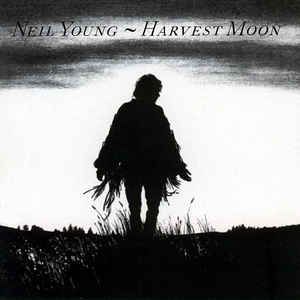 A Record Store Day Black Friday first release of 5000.
Gatefold sleeve. Includes a printed insert with lyrics, artwork and credits.
The D side has an etching of the album cover artwork.

When Neil Young seems about to zig, he zags. Two years after 1990's loud Ragged Glory, he retreats to an old world of steel guitars, gentle folk melodies, and pristine country choruses. (That's Linda Ronstadt, who helped make 1972's Harvest a hit album, singing backup on the follow-up.) Young name-drops Hank Williams, Jimi Hendrix, and his old dog, King, in rich reminiscences about the musical ride he and his fans have shared since the late '60s. The album, as Young sings in "One of These Days," is "a long letter to all the good friends I've known." --Steve Knopper

I'm a passionate Neil Young fan, and I love many songs on this album, including "Hank to Hendrix," "

Harvest Moon," "You and Me" and "War of Man." These all rank with his best acoustic material. "Old King" is a charming ode to Neil's lost pet. "