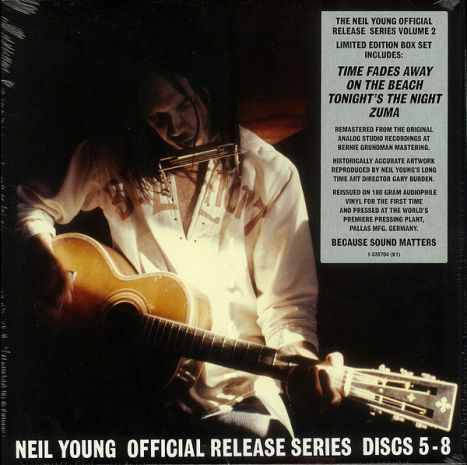 
includes remastered 180gm editions of the so-called Doom Trilogy of Time Fades Away, Tonights The Night and On The Beach plus Zuma; it was previously slated for the 2014 RSD but was delayed by Young himself, although fans were justifiably excited by the news. As reported by AnalogPlanet.com, the transfer from the original master tapes to vinyl was definitely reason to be excited because they are old tapes and at least one required baking. This may be the final analog pass for vinyl.


Neil Young's 1973 album Time Fades Away is a live album featuring his backing band the Stray Gators, and beyond its initial release, has never been reissued. That is, until now.. The band featured Tim Drummond, Johnny Barbata, Jack Nitzsche, and Ben Keith. It was recorded shortly after the death of Crazy Horse guitarist Danny Whitten.

Neil Young's 1973 "Time Fades Away" is one of the most remarkable live albums ever recorded. Certainly at the time of release, it was almost unprecedented for an artist to release a live concert recording of previously unreleased material. Long out of print on vinyl and still unavailable on CD in the early 21st century, the album is considered to be the "Holy Grail" of all Neil Young albums and the "missing link" of the "Ditch Trilogy".

"Time Fades Away" is the first installment of the trio of albums known as the "Ditch Trilogy". The edgy moody darkness of recording and brilliantly erratic song selection offer the portrait of the artist undergoing a deep catharsis and excorcising demons which is so palpable that most listeners turned away -- or worse ignored completely.

Critic Janet Maslin writes in a 1973 New York Times review on the film Journey Through the Past about "Time Fades Away":

"... the vocals are wild, agonized, deliberately jarring. The backing musicians play less than perfectly because they're playing live, but their gut intensity is an ideal match for Young's new strained sound.

Also Time Fades Away contains one of his all-time great songs, 'Don't Be Denied'; the song mixes autobiographical verses with a chorus that chants the title warning, all adding up to a wail of epic frustration."

Key to understanding "Time Fades Away" is the context within Neil Young's album discography. Furthermore, understanding "Time Fades Away" is key to decoding the far more well known followup releases Tonight's The Night and On The Beach. Released in 1973 following the massive success of the multi-platinum selling Harvest, fans were definitely expecting those folkie mellow hit tunes like "Heart of Gold".

While fans did hear such Harvest favorites as "Heart of Gold"'s sunny optimism, they also heard more than just a laid back vibe. Listeners got raw emotional lyrics and high amplification electric guitar. This was not the Neil Young music they were expecting to hear when they purchased their tickets.

"'Heart of Gold' put me in the middle of the road. Traveling there soon became a bore so I headed for the ditch."

Hence "Time Fades Away" is sometimes referred to as the first installment of the "Ditch Trilogy".

The Time Fades Away tour took place in the aftermath of Crazy Horse guitarist Danny Whitten's death. Whitten had been trying to kick a heroin habit and was fired by Young, who gave him an airline ticket home and fifty dollars. The next day Whitten was dead of an overdose and Neil was devastated by the news. As the stress of the tour and grief over Whitten's death sank in, Young's concerts became more and more ragged and raw.

Neil Young's 1974 release On The Beach is considered one of his classic albums,
Mr. Young's fans can enjoy one of his most blisteringly savage albums. After his record label rejected his eulogy to two lost friends, Tonight's The Night, Mr. Young came up with the ragged edged On The Beach.

The album opens with "Walk On", Mr. Young's rebuttal to Lynyrd Skynyrd's rebuttal of him as well as a rebuking of the press who criticized him during his 1973 tour.

"See The Sky About To Rain" confronts a similar environmental topic as "After The Gold Rush" and has an eerie organ and a haunting steel guitar played evocatively by long time cohort Ben Keith.

"Revolution Blues" is a dark and disturbing song about a cult and the terror they may inflict on the wealthy residents of the Laurel Canyon that is clearly inspired by the Manson family. The song's music belies the dark tone of the lyrics with shimmering guitars that undercut the subject matter. It is very good song, but Mr. Young would go onto to perform the song acoustically on the subsequent tour that would better capture the stark nature of the song.

"For The Turnstiles" is a brilliant song that is driven by a stuttering, bluegrass banjo and was inspired by the stadium tour he had just completed with Crosby, Stills & Nash. Mr. Young was clearly disturbed by the fact that big business was starting to take over rock and roll and art was suffering for commerce. The song foretells of the selling out of musicians and the forming of corporate rock.

"Vampire Blues" is a stinging commentary about the oil business. Both the title track and "Motion Pictures" are self-reflective songs, the former about sacrifices for a career and the latter about his relationship with actress Carrie Snodgrass.

The album's final track, "Ambulance Blues" is one of Mr. Young's masterpieces. Clocking in at almost nine minutes long, the song tackles numerous subjects including some recurring themes of Mr. Young's music like the pillaging of the land and its native people, dirty politicians, depression and his childhood.
The song is sparse and mostly acoustic. It is a loose tribute to a hero of Mr. Young's, an English folkie, Bert Jansch. The song actually clips its beat from a Mr. Jansch song. On The Beach has the mournful qualities of Tonight's The Night, but unlike its predecessor that offered only bleakness, this album finds Mr. Young beginning to find some light.

By 1975 Young had written some of the most enduring anthems in rock history. But from the slow, tension-building piano opening of "Tonight's the Night", he downshifts into darkness and Crazy Horse's folk-country melodies take on a guttural hum that would eventually speak to generations of punk and grunge musicians. Inspired by the overdose deaths of two of Young's friends, roadie Bruce Berry and guitarist Danny Whitten, the title track (and its closing reprise) is a hypnotic cry of "why?" Even the relative party songs, "Come On Baby Let's Go Downtown" and "Roll Another Number", fit the album's bus-to-nowhere resignation.

Neil Young put his heart and soul on this album. You can feel the pain and sorrow he felt at the time of recording this. The death of two of his friends are the theme of this emotional album. Even if you are a casual Neil Young fan, you should have this album. Not a bad song is on the disc. I had heard that when Neil turned this album into his label, they rejected it for being to dark and disturbing.
If that is true those people should not have been in the music industry. It is those reasons that make this the classic that it is. This is not for people who like a little happy face on all the music they listen to. This is raw and real. Simply put, a classic..

Zuma was the first studio album that was credited to Neil Young & Crazy Horse since his second release, Everybody Knows This Is Nowhere. While various members of the band appeared on albums in between the releases, Zuma contains the power rocking sound that only the complete band could produce. "Barstool Blues" is an underrated gem that has bluesy guitar riff that pops throughout the song. "Drive Back" and "Don't Cry No Tears" have a grungy sound. "Stupid Girl" is great song with a great vocal. "Pardon My Heart" is an acoustic based number as is the closer "Through My Sails" which features Crosby, Stills & Nash and was a leftover from the aborted sessions in 1974 that was supposed to yield the band's followup to Deja Vu. The standout track on the album is "Cortez The Killer" with its droning guitar solo and vivid lyrics, the song is tremendous.

This album was a big hit out of the box, topping the charts. Still, there must be more to it, since the album wasn't just a big hit, but one of the biggest ever, becoming one of the very few LP`s to cross the threshold of listed in the top 200 biggest sellers of all time.

Neil Young's words and the Stones' melody ( Lady Jane) made this into a very beautiful song.


Neil Young - Roll Another Number (For The Road)


one hell of a song. i have a top ten of songs and this wonderful song is in it .. by the wonderful neil young ...

... in a electric setting on the Bospop Festival in Weert The Netherlands on July 11th 2008

This is a truly beautiful song that gets your mind going. Brings a tear to my eye every time. I would want this and Harvest to be played at my funeral,
, a beautiful timeless piece