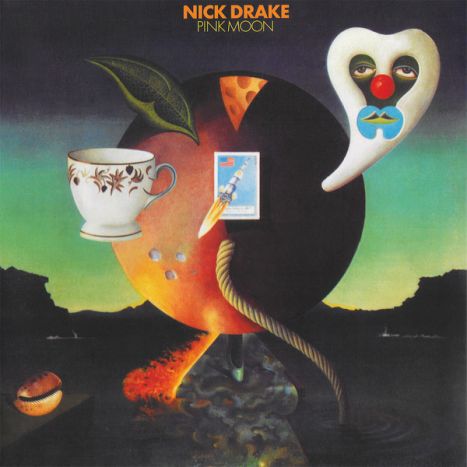 Nick Drake is just beyond spectacular. His songs reach your soul
This ripped at my sensibilities and made me human again. Timeless.

Nick Drake is definitely one of those hidden gems of music. He's one of those musicians who lived and died in obscurity. A musician who attained small following for years before the masses finally discovered their brilliance...


Pink Moon is a rather intimate album, with exception of one piano overdub, it's just Nick, his guitar,and his heart and soul. When, I listen to this I envision Nick in the middle of the night sitting on his bed strumming away. The rich sound makes you feel like your in the room with him, and is a perfect listen for when you're up late at night. Sadly, he was plagued by depression..

It is a damn good thing that this man is not alive today. His purity and ethics would have left him in an even deeper state of depression if he were to suffer the fandom his music has earned him as well as the use of his music for commerical purposes. People this sensitive are gifts to the world, but they usually implode and lack the coping mechanisms to survive in modern society. Nick was a walking open wound, a raw exposed nerve and one listen to his art will reveal this. What an amazing thing that he was open enough and talented enough to bear his soul in a way that makes us feel ours so.

The second track, "Place to Be" makes my chin quiver every time and cry most of the time I hear it, and I am not ashamed to admit it. There is something exquisite, decadent and enlightening about indulging in this artist's "dark" music. Depressing and melancholy? Yes, certainly. Beautiful, nuanced, and intimate..

After completing the album alone using just his acoustic guitar, gorgeous English voice, and a few splashes of piano, he dropped it off at the desk of his record label anonymously, and when it was finally opened and played they realized they had a fantastic new album from the inimitable Nick Drake. This alone makes the music very interesting before you even get the album in your stereo, but once the opening strums of the title track chime in, you know it will live up to the expectations you have. Full of gorgeous acoustic playing from start to finish, and great lyrics to boot, this is an essential folk recording.

"Pink Moon" - Used in a VW commercial, this was an odd song to sell cars but it introduced the world to one of Drake's best tunes. Sinister lyrics, subtle acoustic strumming, and perfect use of soft piano make this an economical and heartbreaking song.
"Place To Be" - I've always loved Alex Chilton's acoustic folkier material, and this reminds me a bit of him. Keeps the album flowing smoothly, great tune.
"Road" - More affecting folk with superb guitar playing. Another all time Drake fave.
"Which Will" - Probably my favorite guitar playing and lyric on the record. Drake sings his heart out on this one and reminds me why I love his voice so much.
"From The Morning" - A great album closer. The guitar style on this tune features a bit more fingerpicking, and this is a great song to close


Nick Drake - From The Morning


Nick Drake - Place To Be

what a beautiful human being

Nick Drake - Which Will

...it breaks my heart that you could never see the impact of your work, whether you meant to die or not. your music keeps me going

Nick Drake - Things Behind the Sun

One of the most beautiful songs ..

The Mars Volta turned it into this atmospheric ballad of psychedelia. Yet still maintaining that subtle sense of melancholia and delicacy.
This version, the original, has higher level of emotionality within it's simplicity.

Everytime I hear this song it makes me think of a comment someone once said about Nick:

"Nick, you made being a teenager with a soul as old as the sky more bearable.

The music is wonderful enough on it's own, then you read the words Nick weaved so spell-bindingly between those dulcid notes. Bittersweet magic. "Counting the cattle," what a telling, descriptive lyric. Here was a man who cherished the right to be alone w/ one's thoughts and to be away from the herd, as do any of us who fall to the intro- side of -vertism.