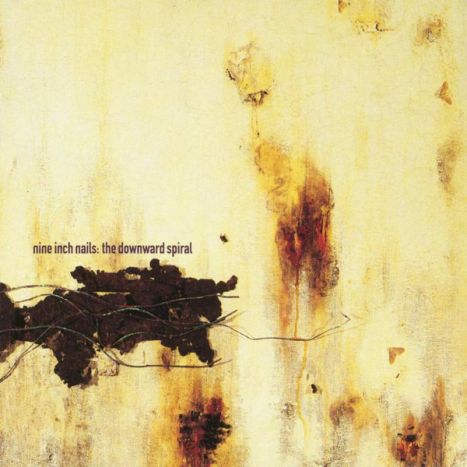 Each vinyl has a printed inner sleeve.

A dark, intense, brutal, profane and graphic album, _The Downward Spiral_ is not for those who can't stand sonic overkill, but for those who love intense, explosive and frighteningly loud music - added with some depressing lyrics -- and/or vice versa.

Like the title suggests, this is not a happy album. If you like songs about cruising on the beach, and picking up the hottest girls, then I advise you to leave this page. Featuring such guest appearances from guitarist Adrian Belew (Frank Zappa, King Crimson etc) and Stephen Perkins (Jane's Addiction), this is a wallowing, disturbing, hellish and thought-provoking portrait of (Trent Reznor's?) descent into the most hellish places of the human psyche. Some of the tracks:

"Mr. Self Destruct"--An abrasive, aggressive industrial number. Turn this up loud if you want to abuse your eardrums, or to annoy your friends, parents, neighbors or anyone else.

"Piggy"--One of the slower pieces on the album. The ending features a bunch of seemingly different drum and synthesized parts spliced together to form typical drum patterns, making it sound like a really messed up remix. But, it's really cool.

"March Of The Pigs"--Another explosive industrial number. This time, with an odd rhythm, and some unpredictable shifts into gentle piano and voice modes.

"Closer"--The hit of the album. Seems to be the most 'accessible' and radio-friendly on here. However, it's doubtful that fans of the radio heard the full 6-minute version contained on here.

"Ruiner"--An industrial number with some funky beats. Love the dimly audible vocal production from Trent on here. Also features an ominous and cinematic keyboard/synthesizer sweep during the sexual innuendo-filled chorus.

"The Becoming"--This features a very strange rhythm (which I think is in 13/8.) The main beat is pretty much repeated throughout the song, with the exception of an acoustic break in the middle. Behind all of this are sounds of people screaming, or laughing. Whatever's going on, it's pretty disturbing.

"I Do Not Want This"--A very disturbing piece lyrically, fronted by some techno beats. It finishes with an intense climax, as Trent's vocals are smothered in a computerized wash of synthesizers.

"A Warm Place"--A new age-esque instrumental which is beautiful and moving. The thing that I find disturbing about this track is that instead of ascending two half-steps to close out the track from the main key, it descends two half-steps to finish out the track. Either I'm superstitious, or that just represents something very ironic, disturbing and depressing. Plus, I rarely hear this used in music. Almost genius.

"The Downward Spiral"--Trent must have really been "cooked" when he made this track. This is the most bizarre, disturbing, jarring and bothersome track on the album. Not only are the suicidal lyrics graphic (and voiced in a snaky, spoken word manner by Trent), but the haunting and almost devilish cries/screams in the muffled background just really give me the shakes. As I listen to this track at this very moment, I'm getting the shakes. It's that unsettling. Before all this happens, you get about 2 minutes worth of sound effects, which sound like bitterly cold winds blowing.

"Hurt"--A slow, honest, depressing ballad to close out the album. The ending is one of long, noisy distortion.

As noted, this album is not for the faint of heart, for so many reasons. If you're on the verge of suicide, this is probably not the album to listen to - or conversely, after listening to this (especially the title track), you may just want to stay alive -- fearing that you'll end up in a world like the one featured in this album. If it scares the daylights out of you, it's probably a good thing. I'm probably making no sense, but this is a dark, intense and scary masterpiece. Recommended for the designated listener.

Nine Inch Nails - Closer -
If this isn't art, then I don't know what is!

This song is sad yet at the same time very beautiful. You can't even imagine how deep this song is for me, it makes me misty-eyed. I love both the NIN and Johnny Cash versions. A well-written song is one that translates across genres and retains the feeling, and this song does that easily.