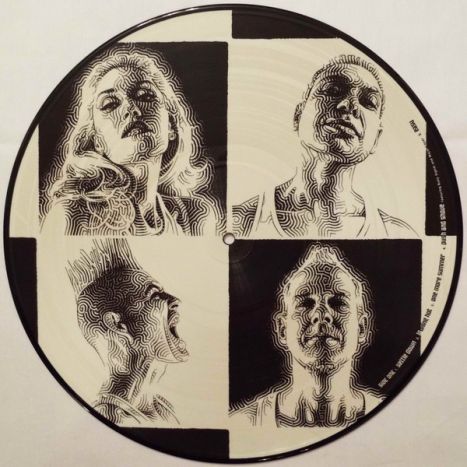 No Doubt - Push and Shove


A1 Settle Down
A2 Looking Hot
A3 One More Summer
A4 Push And Shove
Featuring  Busy Signal, Major Lazer
A5 Easy


The Guardian's Caroline Sullivan felt that "this record simply takes up where 2001's Rock Steady left off", but ultimately stated, "As a comeback, this is nice work."

The Independent's Andy Gill commented that the album finds No Doubt "making only the most tentative divergences from previously tried and tested strategies, which gives Push and Shove a character that could be described as either dated or timeless", while noting that "the title-track offers a fun, ebullient return to their ska-punk roots"


Push and Shove is the sixth studio album by American rock band No Doubt. It was released on September 21, 2012 by Interscope Records. The album serves as a comeback album for the band as their last album, Rock Steady, was released over ten years previous. A deluxe edition of Push and Shove features acoustic versions and remixes of several tracks and "Stand and Deliver", a song No Doubt had covered in 2009.


The album debuted at number three on the Billboard 200 having sold 115,000 copies during its first week. "Settle Down", the first single from the album, was released in July 2012 and received mild success, debuting and peaking at number thirty-four on the Billboard Hot 100. The album's title track features producers Major Lazer and Jamaican reggae artist Busy Signal, and was released as a promotional single the following month. "Looking Hot" was released as the second single from the album.

After numerous listens I can say I love this new No Doubt album, and I was a fan since their debut album seventeen years ago in 1995 came out. I understand some fans feel this isn't what they were expecting, but come on artists grow and evolve. You can't do or make the same music forever.

Like Madonna, and other artists before them they are maturing and I for one am happy to be on this journey with them. It's so rare now days to find a album that you can listen to from start to finish and actually enjoy.

This is an album right up there with the new Madonna and Alanis Morissette Albums, where you can listen to it from start to finish and (with the exception of a few songs) really enjoy it.

The whole album is amazing, but the stand out tracks are the beautiful Undone, Easy, One More Summer, Push and Shove, Gravity, Undercover, Sparkle, Heaven, and Dreaming The Same Dream.


No Doubt - Push And Shove

I must say they've done amazing job on this one, the record is complete, combines the old school style and retro sounds with modern melodies.


No Doubt - Settle Down


No Doubt - Settle Down

on the Ellen show