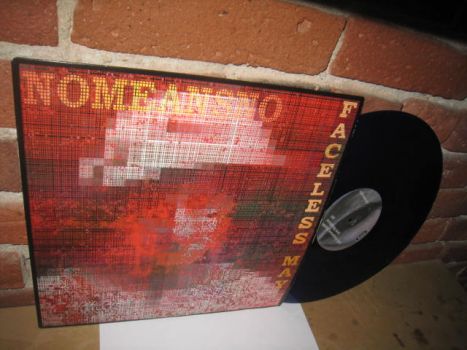 I should preface by saying that I am a HUGE Nomeansno fan and this album is superb on its own merits, despite what any following bad words may suggest.

Relative to the rest of their discography, I'd say this EP is good but not great. John's drumming is still fantastic, Rob's voice has only gotten more powerful with age, and the guitar-work the strongest that I can remember it being; There are still, however, some oddities that prevent these songs from rivaling Nomeansno's previous work.

Let me just say one thing before going into each song: John's drums sound phenomenal. Seriously, on this album it's incomparable both in tone and technique and completely steals the show.

The first song, Faceless, is a great little jaunt into the surreal. Its minimalist style really allows the vocals to shine, though Rob's pseudo-spoken-word style on this song is not his most impressive (compared to, say, The World Wasn't Built in a Day). John's floor tom is booming and Tom's guitar fills the sound nicely. This is my favorite song on this EP; a lot of people seem to dislike it, but I feel that it's the most realized of the songs. Rob's vocals really take the stage and the instrumentation does nicely to back it up.

Slave, the second song, is a strange hard rock song. From it's bluesy intro it strays in and out of heavy metal. John seems to change his last name to Bonham and pounds away expertly, as do the guitar and bass; however, the bluesy sections feel a bit wonky (or at least compared to the expertly-done heavier sections). Overall, it's a fair bit lacking compared to the gravitas of the first song, but it makes up for it in sheer rockin' goodness.

The third song, a sprawling epic called Old, seems to be a message from the band to its fans. It's a rather touching, in a way. The song itself shifts from near-sludge to intense rock balladry effortlessly and is combined with the best vocals on the album. The lyrics are simple compared to Faceless, but when they're belting it as they do you hardly notice. The instrumentation is the most low-key on the album, but that's really not what this song is about.

And finally, there is Something Dark against Something Light. John brings pounding yet intricate drumming in a tom-heavy style that sounds especially fantastic. Beyond that, the bass and guitar fill in the sound with exotic rhythms and melodies that work to carry the ominous tone of the lyrics. Unfortunately, this song, for all it's technical merits, falls short in a number of ways. The most noticeable is a lack of any kind of progression; it sets itself up and simply trudges along.


Near the middle it begins to sound a bit like Isis on sulfur hexafluoride, but after a somewhat awkward pause it simply returns to normal. It has all this post-rock potential but nowhere to go. Beyond that, Rob's vocals sound a bit odd and the somewhat sparse lyrics are stretched to their breaking point during the nearly seven and a half minutes of the song.

Overall, this album is stellar and has some very avant-garde music and ideas mixed nicely with solid rock. It's not a good choice for someone just starting out with Nomeansno, but for fans, especially fans of albums like One (there's little to no 'punk rock' left in their sound here, for better or worse) I'd say it's definitely worth a listen.


Nomeansno - SOMETHING DARK AGAINST SOMETHING LIGHT