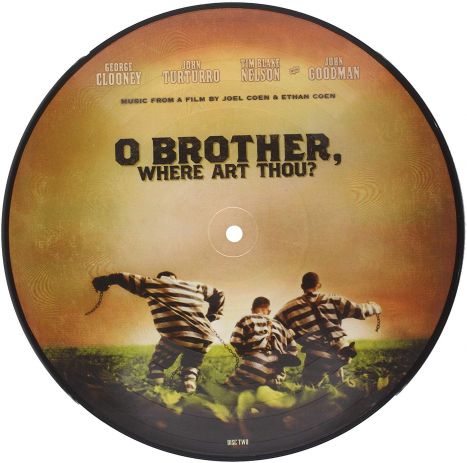 O Brother, Where Art Thou - Soundtrack

The best soundtracks are like movies for the ears, and O Brother, Where Art Thou? joins the likes of Saturday Night Fever and The Harder They Come as cinematic pinnacles of song. The music from the Coen brothers' Depression-era film taps into the source from which the purest strains of country, blues, bluegrass, folk, and gospel music flow.


Outstanding tracks are both vocal versions of "Man of Constant Sorrow," "Down In The River To Pray," "O Death," "Hard Time Killing Floor Blues," and "I'll Fly Away," but you can listen to this from beginning to end.


The 19 rustic tracks here are mountain music, primitive gospel, and the hobo vein of folk, the ancestors of bluegrass and country. You can feel the desperation, simplicity, and reverence of another era through performances by Ralph Stanley, Gillian Welch, Norman Blake, Emmylou Harris, Alison Krauss, John Hartford, Chris Thomas King, the Fairfield Four, the Whites, the Cox Family, and others, along with a field recording of a chain gang ("Po Lazarus" by James Carter & the Prisoners), Harry McClintock`s 1928 hobo fantasy "Big Rock Candy Mountain," and the Stanley Brothers classic "Angel Band." Union Station takes on the musical identity of the three star characters onscreen, known as the Soggy Bottom Boys, and their stark, unvarnished renditions of "I Am a Man of Constant Sorrow" and "In the Jailhouse Now" are arresting. Ditto for Ralph Stanley, who raises the hairs on the back of the neck with his acapella mountain singing on "O Death," and the Fairfield Four on "Lonesome Valley." The emotional purity and grit of this soundtrack will take the buildup of the plaque of modern living and peel it right off.


The Coen brothers have worked their magic again with their excellent film "O BROTHER, WHERE ART THOU?" The unique vision and perspective of the film is rivaled only by the excellence of its soundtrack, which might just be the best movie soundtrack I've heard.

Quite simply, there is not one weak track on this LP, period. Not one. There are highlights, to be sure, but the greatest aspect of this soundtrack might be that the diverse array of recordings and styles presents the listener with something new to appreciate every time they play the LP.

Some tracks deserve special mention, however. Ralph Stanley's "O Death" is a haunting, passionate song , especially if one recalls the scene in which it appears during the movie. "Down In The River To Pray" by Alison Krauss is another excellent track; when my friend heard the the harmonies of this song, so wonderfully ethereal and poignant, she simply said: "that's beautiful." And the Peasall Sisters are outstanding on "In The Highways," singing with the innocence of children but harmonizing like adults as well.
In my opinion, however, the true gems of this soundtrack are the recordings by the Soggy Bottom Boys, featuring Tim Blake Nelson and Dan Tyminski. "In The Jailhouse Now" is just fun to listen to, and knowing that Tim Blake Nelson and John Tuturro actually sang their parts for the movie rather than lip-synching adds an authenticity that is hard to get from Hollywood these days.

"I Am A Man Of Constant Sorrow" is, however, the spiritual center of the movie and the most outstanding part of the soundtrack. In the movie, George Clooney did such an excellent job lip-synching that moviegoers swore he was really singing the tune. It was actually the work of Dan Tyminski, though Tim Blake Nelson and John Tuturro again sang their own parts. This song simply sticks in your head and stays there, and for once that's a good thing. Tyminski's vocals are outstanding, and the two recordings are distinctive enough that one appreciates both versions being included on the soundtrack.

Another noteworthy aspect of this LP is the liner notes by the Coen brothers, who unabashedly lament the disappearance of this style of music from Nashville in favor of 'modern country music.' It is an interesting perspective from two filmmakers who always seem to have something important to say through their art.

Bluegrass pioneer Dr. Ralph Stanley has been one of the guiding forces in traditional music since the early 20th century. Not only is he a fantastic force on the banjo but his high and lonesome sound of singing has been the definition of oldtime. Ralph is truly a link to the past I hope you enjoy this video of him performing the classic "O'Death" which he made famous in the film "O'Brother Where Art Thou".