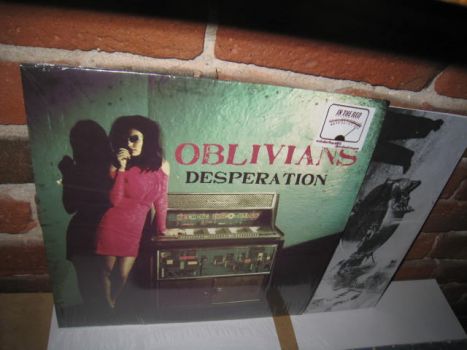 Skip to the beginning of the images gallery
Details
Oblivians - Desperation


Back together, 16 years after releasing their last album, Oblivians prove age is no barrier to howling garage rock's teenage cry of lust. The teenage bit is important: despite being in middle age, Oblivians cast their songs in a mythologised teen world of pinball and battles of the bands, where Suzi Quatro is still a heroine. If their own songs are stellar  Pinball King sounds like it could have been transplanted straight from one of the dumber, more fun albums out of New York in 1977, while Run for Cover is Motörhead reimagined by Deep South 60s freaks  then their covers are even better. The Paul Butterfield Blues Band's Loving Cup becomes a two-chord punk stomp, but best of all is Call the Police, which beefs up Stephanie McDee's regional zydeco hit, until it's a bruising, feral celebration of appalling behaviour  "You gotta call the po-leese, call the po-leese/ We gonna get our drinks on." Fourteen songs in 31 minutes, and every moment a thrill.


The Memphis trio made music that was legitimately funny and provocative, and they made it sound dangerous. Between 1995 and 1997, they packed in blown out guitars and snarling, guttural vocals, all of which could have been filtered through a rusted out tin can. Their songs were fast and loud, and when they made their last proper record in 1997 with New Orleans weirdo composer Mr. Quintron, they sounded like the MC5 being backed by an organist. They weren't around for very long, but in their relatively short time together, they cemented themselves as godfathers to today's garage punk landscape.

Since then, all three members of the band have kept pretty busy. Jack Yarber made some solo albums under the name Jack Oblivian, most recently on 2011's solid LP Rat City. Greg Cartwright became the frontman of Reigning Sound. Eric Friedl founded Goner Records.

So with some solid achievements under each of their belts, they're back with a reunion album that, in the context of other band reunions, arrives at an ideal time. They've been away for a while, sure, but not long enough to make Desperation remotely analogous to the new Iggy and the Stooges record. (To say nothing of the music from Ready to Die, Oblivians don't have multiple decades seperating their new work and their best work.)

But there's something that needs to be considered when approaching Desperation: This is not the same Oblivians from 1995's Soul Food. This isn't a scrappy, lo-fi punk band brazenly giving songs titles like "Then I Fucked Her" or "Nigger Rich". (In fact, they've pretty much sworn off writing "the nihilistic rock anthem" following the deaths of some close friends, including Jay Reatard. Cartwright has said, "I don't want a record full of swear words. I don't want to offend people.") The influences sound similar, but Desperation sounds slicker than ever. Their singing is stripped of its former bite, and while they still ramp up the fuzz, it's a much cleaner-sounding album made at Dan Auerbach's Nashville studio. And as a whole, it's very inconsistent. There are songs that quickly reveal themselves as unfortunately repetitive ("Pinball King", "Fire Detector") and others where the melody and tone just aren't that interesting over 2.5 minutes of music ("Oblivion"). Probably the biggest indication that they're no longer the same band: The songs written by Cartwright (like "EM" and "Desperation") sound more like a fuzzed out Reigning Sound, whose melodies tap more into 1960s pop than archival Oblivians did.

That's not to insult Reigning Sound, a band with great records-- those just aren't the sorts of songs you're conditioned to hear on an Oblivians record. So predictably, the strongest moments on Desperation come when the trio tap into the strengths from their old albums. "Loving Cup" is a ripping cover of the Paul Butterfield Blues Band track (in the tradition of their blistering 1995 cover of Lightnin' Hopkins' "Vietnam War Blues"). "Call the Police" once again features Quintron's organ in a solid interpretation of Stephanie McDee's R&B/zydeco track. Two of Yarber's writing contributions are huge highlights: the punk burner "Run For Cover" and the doe-eyed ballad "Little War Child". But with this album going in so many directions, the inevitable duds, which flank the highlights, make it hard to get excited about it as a whole.

In a recent interview, Friedl joked, "People will hate [Desperation] when it comes out and in 30 years, when it doesnt matter anymore, kids will think its really great." Maybe this was Friedl's admission that the Oblivians grew up and inevitably made an album that didn't sound anything like their early work. Maybe he's saying that this album needs to be given its own context and removed from the pressures that come along with being the first Oblivians album in nearly two decades. And that's fair-- history and high expectations can irrevocably mar the way you take in a band's post-reunion album. But down the line, the kids will probably still have access to Soul Food, Popular Favorites, and Play 9 Songs With Mr. Quintron. Ultimately, those albums are more immediately gratifying and fun than this one.


Oblivians - Woke Up In A Police Car