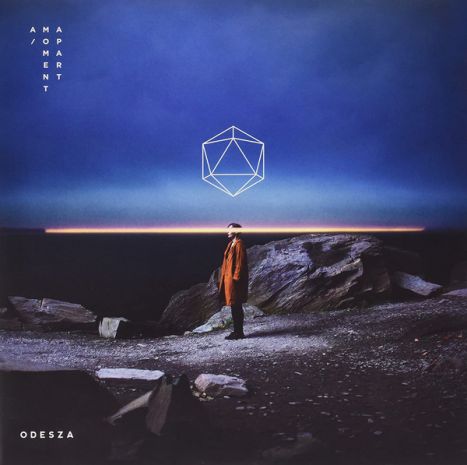 A4 Boy
A5 Line Of Sight
Featuring – Mansionair

B1 Late Night
B2 Across The Room
Featuring – Leon Bridges

B3 Meridian
B4 Everything At Your Feet
Featuring – The Chamanas

( Pitchfork) " Today, Odesza are a proper stadium act. In May, they did two sold-out nights at Colorado’s Red Rocks, complete with electric guitar, eight-person choreographed drum line, and visuals by in-house live creative director Luke Tanaka. The new album is accordingly ambitious; it wants to be a lot of things, trigger a lot of feelings. It’s full of billowing vocal harmonies and seismic rumble and turbo-charged trap beats; its default mode is a kind of eyes-closed beatitude, and every climax is but a stepping stone to a bigger climax. That it’s an album about desire is obvious; you can sense their anticipation at feeling that brass ring brushing beneath their fingertips.

After a ruminative introduction, the title track explodes with so much light and color that you half expect Animal Collective’s voices to come soaring through the flames. From there, A Moment Apartjust keeps chasing bigger thrills, deeper colors, and more heartstring-tugging emotions across an hour-long set of bright-eyed electronic pop, pan-pipe trap, breakbeat soul, and slow-motion house. “Boy” is a gleaming trap/dubstep amalgam fitted out with a yearning vocal hook; “Meridian” flips cascading, exotic-sounding choral harmonies into a soundscape evocative of a CGI-enhanced rainforest flyover in IMAX. As they’ve beefed up their sound, though, Odesza have lost some of their uniqueness. “Higher Ground,” featuring Naomi Wild, borrows from Purity Ring’s Kevlar-coated twee; “Line of Sight,” featuring the singers WYNNE and Mansionair, is a moody, mid-tempo ballad reminiscent of the Chainsmokers’ “Closer,” right down to the wheezy, staccato keys.

It doesn’t help that their guest singers’ lyrics rarely scale heights comparable to the duo’s vertiginous waveforms. “I need you now/Gravity can’t hold us down/So just take me there/To higher ground,” sings Naomi Wild, hemmed in by the confines of her rhyming couplet; two songs later, WYNNE falls into the same moon-June-spoon-shaped rut: “I’m feeling in and out/I turn full circle round and round/So will you help me down/Come grab my hand for solid ground.” But those vague platitudes may be preferable to Leon Bridges’ verses on “Across the Room,” a cloying slow jam whose sappy, sexed-up gravitas brings to mind Dave Matthews Band’s “Crash Into Me.” The breakup song “Just a Memory” is less icky; Regina Spektor is a more convincing storyteller, but her soaring soprano coo feels better suited to a Disney theme song. Squeezing genuine emotion out of this music is about as likely as finding comfort snuggling with one of Jeff Koons’ balloon-dog sculptures.

It all comes to a head with the closing “Corners of the Earth”: Over diffuse choral harmonies, RY X does his best Justin Vernonimpression, while swelling synths and pounding drums conjure M83 and Sigur Rós. As the song builds, you can practically see the fighter jets crisscrossing overhead, their fuselages kissed with the colors of the fireworks exploding around them. “Tonight we run/Through love we never knew/Our love to everyone/We love tonight for love,” he sings, tautologically; “We’re golden/We’re golden/We’re golden/We’re golden.” But the harder the band strive to reach sublimity, the more earthbound their music feels. It’s fitting that he should begin with “Tonight we run/We run into the sun”; the song, like the album, has Icarus’ charred fingerprints all over it."