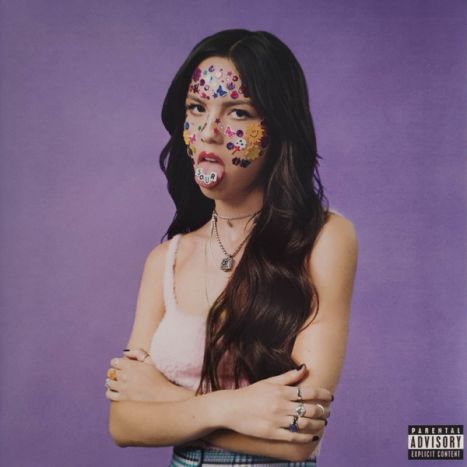 " Gets better and better with each spin, if you don’t mind the constant finger pointing. Perfectly captures the drama of adolescence and crushed first love."

( pitchfork) " Of Rodrigo’s many influences, she’s most obviously styled herself after Taylor Swift, whose work she praises often and emphatically. Like her idol, Rodrigo treats emotional turmoil like jet fuel, and laces her lyrics with specifics—a Billy Joel song she and her ex listened to together, the self-help books she read to impress him. She’s said that the shouty bridge in Swift’s “Cruel Summer” directly inspired her own in “deja vu”; “1 step forward, 3 steps back” interpolates the reputation song “New Year's Day.” And publicly inveighing against a heartbreaker, then sauntering off with the last word? How very Swiftian.

On “happier,” a sweet-and-sour ballad that appeared in demo form on Rodrigo’s Instagram in early 2020, she grapples with the faulty narrative of female rivalry: “And now I’m picking her apart/Like cutting her down will make you miss my wretched heart.” It was this song that captured the attention of Nigro, a former emo band frontman who’s written with Carly Rae Jepsen and Conan Gray. It’s easy to hear what he heard in the homemade snippet: a gently tumbling melody, Rodrigo’s flute-like lilt, a winning balance of pettiness and wisdom.

Meanwhile, Rodrigo is still very much a part of the Disney ecosystem, reprising her role in the second season of HSM:TM:TS, which debuted just last week. To anyone familiar with the history of Disney darlings and the morality clauses that typically bind them, the profanity that peppers Sour will stand out as a break from type.

This minor subversion of expectations has given Rodrigo a low-key rebel status. Like her seeming newness, her earnestness, the heartbreak baked into her ascent, it’s one of the qualities that make her easy to root for. In a way, the flattening effect of the internet has worked in her favor, allowing her—someone who has been on TV for roughly a third of her life and is signed with the biggest record company in the world—to slip into the role of the underdog"