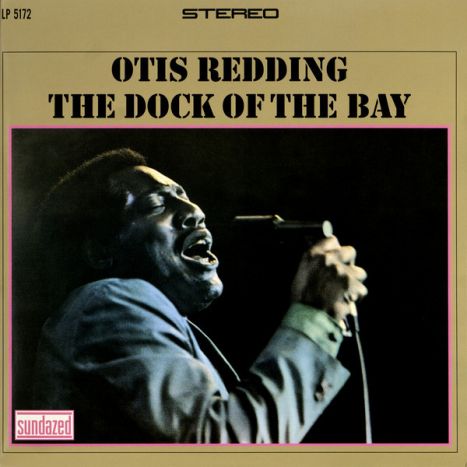 Otis Redding - The Dock Of The Bay

In a 1990 interview on NPR's Fresh Air, Cropper explained the "origins" of the song:

Otis was one of those kind of guys who had 100 ideas. Anytime he came in to record he always had 10 or 15 different intros or titles, or whatever. He had been at San Francisco playing The Fillmore, and he was staying at a boathouse, which is where he got the idea of the ship coming in. That's about all he had: "I watch the ships come in and I watch them roll away again." I took that and finished the lyrics. If you listen to the songs I wrote with Otis, most of the lyrics are about him. He didn't usually write about himself, but I did. "Mr. Pitiful," "Sad Song (Fa-Fa);" they were about Otis' life. "Dock Of The Bay" was exactly that: "I left my home in Georgia, headed for the Frisco Bay" was all about him going out to San Francisco to perform. 

Together, they completed the music and melancholy lyrics of "(Sittin' On) The Dock of the Bay." From those sessions emerged Otis Redding's final recordings, including "Dock of the Bay," which was recorded on November 22, with additional overdubs

Released shortly after his death, this album was the first of several posthumous Otis Redding releases. The fabulous title track reached number one on both the pop and R&B charts, introducing Otis' talent and emotive energy to a much wider (and whiter) audience. Inspired by the Beatles' adventurous songwriting, and his positive experience at the Monterey Pop Festival, he wrote "The Dock of the Bay" while relaxing in Sausalito. He recorded it on December 7, 1967, three days before the airplane crash that would take his life and four members of his touring band, The Bar-Kays. The song was unlike anything he had released thus far, and showed the promising artistic direction he was headed in. Guitarist, co-writer, and friend Steve Cropper compiled this tribute album around it, gathering together some of his past singles, along with the unreleased ballad "Open The Door." There are plenty of great songs, such as the magnificent "Let Me Come On Home," "Don't Mess With Cupid," and his classic duet with Carla Thomas, "Tramp." The funky "Huckle-Buck" is from the Stax "Stay In School" record, and two fine cuts from earlier albums close out the set. As always, the backing musicians on all of the tracks are the fantastic Stax players of Booker T. & The MG's and the Mar-Keys. This record is a testament to Otis Redding's mastery of his craft, and makes for a decent primer on his sound. It was soon followed by "The Immortal Otis Redding," an excellent collection of unreleased studio recordings

OTIS REDDING - (Sittin' On) The Dock of the Bay


Otis Redding - Nobody Knows You (When You're Down And Out)

it's good to see Jay Z and Kanye paying tribute to an INCREDIBLE artist who, sadly, is over looked by a lot of the time. If it leads to more people getting to sample and enjoy The Big "O" - that's GOTTA be a good thing.