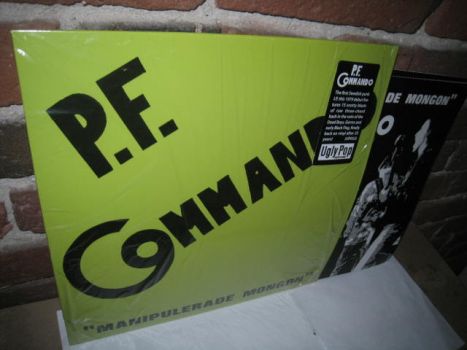 Skip to the beginning of the images gallery
Details
P.F. Commando - Manipulerade Mongon


A1 Allt O.K.
A2 Johnny Bugger
A3 Gänget Från 60
A4 I'm Innocent
A5 Auschwitz
A6 Svenne Pop
A7 Failed Abortion


Self-released in 1979 by one of Sweden's most notorious bands, this monster debut was the country's first punk LP, packing in 15 tracks of pure three-chord bash at its most primal and aggressive.

Vocals are alternately barked and snarled, guitars slash and buzz, the rhythm section thrashes along maniacally-- no pop, no art, just PUNK in the vein of Dead Boys, Viletones, Germs and early Black Flag!


Reissue of this Swedish band's 1979 debut LP, which is considered by many to be the first Swedish punk LP. The label mentions the Dead Boys, the Germs, and Black Flag as touchstones for this, and of the three I'd say the Dead Boys is the closest reference... this is less fully-formed punk per se and more like totally hateful, revved-up rock and roll music.

Rather than relying on the basic pop hooks of first-wave Euro punkers like Ivy Green and Lost Kids, this is all about the power of the riff, and as such sounds more like the early Australian punk bands like Radio Birdman and the Murder Punk groups, though without such a pronounced Stooges influence. All in all it's a great little slice of punk history, and Ugly Pop has done their usual stellar job with the reissue, even including a rad 36"x12" insert with liner notes, vintage flyers and press, and other info about the band and release.