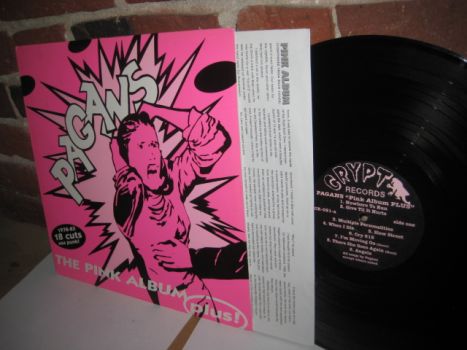 
Notes
Originally released in 1983 on Terminal Records- 007 except "Wall Of Shame" which is previously unreleased. Came on both pink and black vinyl.


This is one of those groups that is best in the studio as opposed to live. Not that I saw them live but all the live trax I've heard of theirs are not as snappy as their studio stuff. Those 5 songs are supreme numbers perfectly crafted, outstanding vocals, perfect blend of vocals/git/bass/drums.

I used to call them the U.S. CLASH like I heard some other folks say but getting more into the CLASH in recent years I see that the PAGANS kept it more straight ahead and less artsy, less messin' around musically in different wonderful directions like the CLASH did.

No, the PAGANS are more like? I dunno. Slightly bratty, sorta post rock, new punk master song writers. Their singles make the perfect album. Thank goodness for that. They have Street Where Nobody Lives LP and the Buried Alive LP whose studio tracks are scattered onto this..

It's cool that they're from Cleveland and that David Thomas, the vocalist and beating heart of PERE UBU and also from Cleveland produced some of their songs.

The Pagans were nothing but two chords with an attitude. Great stuff from a truly classic band. .......
More Information
Please sign in with your email address or Create an Account.
New Products
Compare Products
Compare
Clear All
You have no items to compare.
My Wish List
Last Added Items
Go to Wish List
You have no items in your wish list.
Vinyl Records Vancouver
Categories
Help
Quick Link
Newsletter