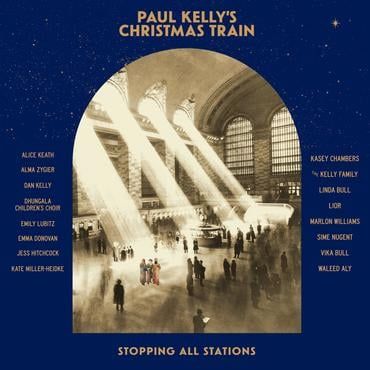 Skip to the beginning of the images gallery
Details
Paul Kelly  – Paul Kelly's Christmas Train
Label: Gawd Aggie – GAWD035LP, EMI – GAWD035LP
Format:
Vinyl, 2LP, Album
Barcode: 0602438403912
Country: Australia / Made in EU
Released: Nov 19, 2021
Genre: Folk, World, & Country
Style:
Tracklist
A1 Nativity
A2 Silent Night
A3 Swing Around The Sun
A4 Christmas
A5 Christmas (Baby, Please Come Home)
A6 Little Drummer Boy
B1 Arthur McBride
B2 The Virgin Mary Had One Son
B3 Tapu Te Po (O Holy Night)
B4 Shalom Aleichem
B5 The Oxen
C1 The Friendly Beasts
C2 Three Drovers
C3 Christmas Must Be Tonight
C4 Surah Maryam
C5 Coventry Carol
C6 In The Hot Sun Of A Christmas Day
D1 How To Make Gravy
D2 Christmas Train
D3 Come Thou Fount Of Every Blessing
D4 Intonent Hodie
D5 What Are You Doing New Year's Eve?
Paul Kelly's Christmas Train is the twenty-eighth studio album and the first Christmas album by Paul Kelly and Paul Grabowsky, released on 19 November 2021.  The 22-track album traverses language and cultural significance, from a Latin hymn to a traditional Irish folk ballad, and a well-known carol sung in te reo Maori.[
Part of the joy in Paul Kelly’s Christmas Train comes from discovering fresh ways to treat the best-known songs, from the Hawaiian guitar and ukuleles of “Silent Night,” with a verse in the original German sung by Alice Keath, to an astonishing performance by Marlon Williams singing “Tapu Te Pō” (O Holy Night) in the Māori language. The story of Jesus and Mary has strong associations with Judaism and Islam (the Qu’ran has a chapter devoted to the story); here on Christmas Train singer-songwriter Lior joins Paul, Alice, and Emily Lubitz for an a cappella reading of the Hebrew prayer of peace, “Shalom Aleichem,” and Waleed Aly recites the vivid poetry of Surah Maryam. Kelly and his band bring a ’60s-fired energy to “Christmas,” an Australian song of longing for home by brothers Chris and Wes Harrington, and Linda Bull tears up the place on “Christmas (Baby, Please Come Home),” a song originally recorded by Darlene Love on Phil Spector’s “A Christmas Gift for You."
"Kelly explains, “There were so many songs I wanted to have on there. Having the wider frame for this album allowed me to have the songs talking to each other, the way that “Arthur McBride" has echoes in the Brazilian song “In the Hot Sun of a Christmas Day.” There is a Hebrew hymn, an Arabic poem, folk songs, classical songs, rock songs. Then the fun, and the challenge, is to get all those elements to work together."
There are songs with an unmistakable local flavour like Three Drovers and Swing Around the Sun, and a sparkling new version of one of the greatest Australian Christmas songs of them all, Kelly’s own How to Make Gravy.
More Information
Please sign in with your email address or Create an Account.
New Products
Compare Products
Compare
Clear All
You have no items to compare.
My Wish List
Last Added Items
Go to Wish List
You have no items in your wish list.
Vinyl Records Vancouver
Categories
Help
Quick Link
Newsletter