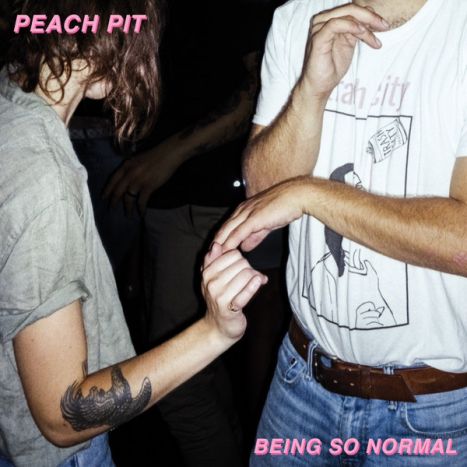 Peach Pit ‎– Being So Normal

" (Shannon Shumaker)( thepreludepress) Self-described “chewed bubblegum pop” band Peach Pit is a relatively new project, only formed in early 2016, but with their debut full-length release, Being So Normal, they have effortlessly carved out a sound that is all their own. Situated somewhere between moody shoegaze and a brighter, fuzzy indie sound similar to that of Mac DeMarco, Being So Normal is the perfect album to bring summer to a close and lazily welcome fall.

If you’ve never listened to Peach Pit until now, then the album’s opening track, “Drop The Guillotine” is the perfect introduction. It’s groovy and laid-back, spearheaded by warm, refreshing guitar tones, complex yet easy sounding drumming and smooth vocals. With a slight retro pop vibe, “Drop The Guillotine” uses simple metaphors to describe an unhealthy relationship with a relatively upbeat tone that floats easily alongside the sweeping guitar work. The following title track takes on a more mellow mood, carried by fuzzy, distorted guitar work and easygoing vocals. Like “Drop The Guillotine,” though, the blending of tones and sounds on this track is stunning.

“Techno Show” is very simplistic and blunt lyrically, giving the album a really human element. Rather than sweeping metaphors and deep introspection, “Techno Show” is more of a stream of consciousness, making you feel that much more connected with the band. Then comes the groovy “Alrighty Aphrodite,” which uses the classic Greek imagery of the goddess to describe a former lover.

Although many of the songs on Being So Normal do tend to have similar tones, they rarely feel flat or boring. Those warm guitars and inviting vocals are a staple of Peach Pit’s unique sound, but if you look a little deeper than the surface, you’ll find a little something special about each track. “Chagu Sideturn,” for instance hosts some of the strongest and most prominent bass work on the album, which flows with ease alongside high energy guitar. “Not Me” also feels significantly darker than the rest of the album, subtly tackling depression without stepping too far away from the warm songs surrounding it. Lines like “She’s always rocking a smile/Haven’t seen mine in a while” are simplistic yet hard hitting.

“Hot Knifer” explores a more stripped down and folky side of Peach Pit’s sound, and the shift is certainly welcome, proving that the band doesn’t need to rely on bright, upbeat sounds to create a great track. Instead, “Hot Knifer” is easily the most stunning song on the album, situated perfectly against “Private Presley,” which finds the band really coming out of their shell before the end. The guitar work on this song is incredible and the added string elements make for a very theatrical listen."