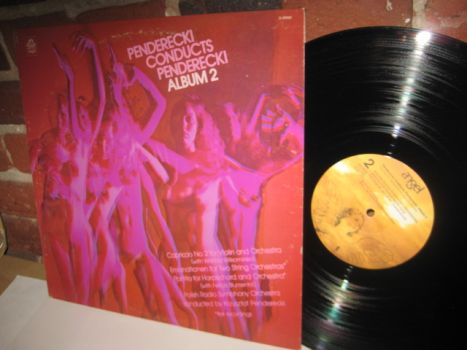 
A1 Capriccio (For Violin And Orchestra)
Violin  Wanda Wilkomirska
11:36

B1 Partita (For Harpsichord And Orchestra)
Harpsichord  Felicja Blumental


This production is interesting. Penderecki is among the few serious composers of the twentieth century that do not shock the listener. His music is innovative without being hard to digest. The composer explores the capabilities of the viola, oboe, and flute. While watching and listening, one realizes that the potentials of these instruments have not been exhausted by the classicists and romantics. The reason why Penderecki's music is beautiful is that it is both experimental and accessible to audience.

Its often commented how Pendereckis musical style has evolved from an aggressively edgy avant-garde style to a more tonal and approachable idiom. But for the composer its less a conscious stylistic turn than a reflection of the seismic changes in his home country and around the globe in the intervening decades.

The world has changed, said Penderecki. This is forty, fifty years ago. How can an artist do the same thing? There are some who do the same thing their whole life, like Chagall. Even as a boy painting in Vitebsk, he was doing almost the same thing.

No, I am more the type of an artist that is constantly changing. Like Picasso, who is maybe the best example.

Those pieces  Threnody, Fluorescences, Polymorphia  they are unique in their technique. I cannot even use the elements because it belongs to the style [of the era]. You cant go back.
More Information
Please sign in with your email address or Create an Account.
New Products
Compare Products
Compare
Clear All
You have no items to compare.
My Wish List
Last Added Items
Go to Wish List
You have no items in your wish list.
Vinyl Records Vancouver
Categories
Help
Quick Link
Newsletter