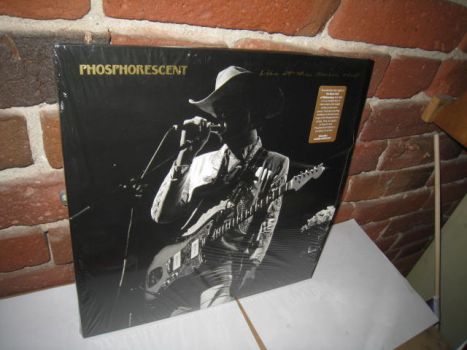 A1 Sun Arise! (An Invocation/An Introduction)
A2 A New Anhedonia
A3 Terror In The Canyons (The Wounded Master)
A4 The Quotidian Beasts


F1 A Picture Of Our Torn Up Praise
F2 South (Of America)
F3 Wolves
F4 At Death, A Proclamation


For fans of Phosphorescent this is a great release, although the live versions don't differ much from the studio versions, live albums tend to have a raw quality to them that give them a stronger energy. This album is no different. The sound is full and clean, very well mixed. The band and vocals are all above standard and the music is riddled with the characteristic country twang of the whiney guitars and the high-pitched vocals that quiver beautifully, so frail yet powerful. Highlights are the best track of 2013 "Song for Zula", the moody " a new anhedonia", the scenic "terror in the canyons" and the vocal acrobatic "The quotidian beasts".
More Information
Please sign in with your email address or Create an Account.
New Products
Compare Products
Compare
Clear All
You have no items to compare.
My Wish List
Last Added Items
Go to Wish List
You have no items in your wish list.
Vinyl Records Vancouver
Categories
Help
Quick Link
Newsletter