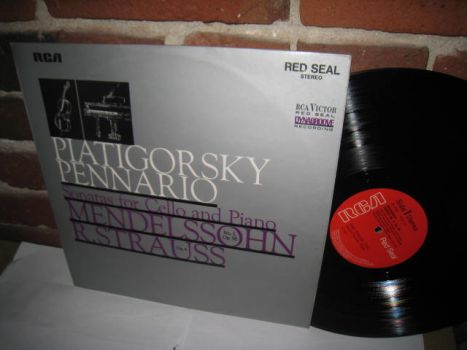 Skip to the beginning of the images gallery
Details
Piatigorsky - Pennario - Sonatas for Cello and Piano - Mendelssohn - R. Strauss


I have always found this Mendelssohn sonata great! I truly think it is one of his most charming works, revealing a same kind of quality as the "Italian symphony"; no wonder he is considered one of the greatest composers of the early 19th century and his influence was strong for example in the early works of R.Strauss (one of which- the Cello sonata- has been included on this disc). This sonata is musically and instrumentally powerful and has a true melodic appeal.

Like the "Italian Symphony", the first movement starts with a delightful and charming tune, the scherzo is exciting and the slow movement has a depth while the Finale returns to the sunny and melodiuos atmosphere of the first movement.

Finally, i thought it was nice to combine the earlier Mendelssohn sonata with the youthful Mendelssohn-inspired sonata by R.Strauss. The cello sonata, while in no way a mature work, is charming and inventive, and has many wonderful melodies.

It has been reported that the great violin pedagogue Ivan Galamian once described Piatigorsky as the greatest string player of all time. He was an extraordinarily dramatic player. His orientation as a performer was to convey the maximum expression embodied in a piece. He brought a great authenticity to his understanding of this expression. He was able to communicate this authenticity because he had had extensive personal and professional contact with many of the great composers of the day.