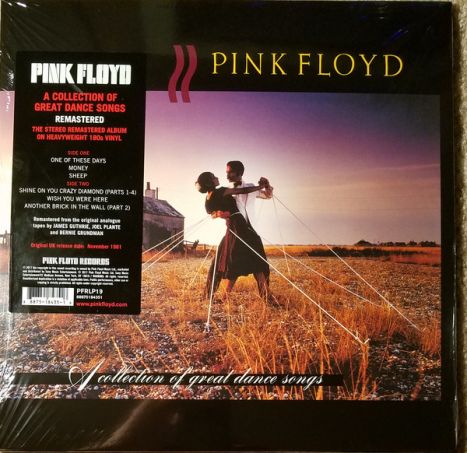 One Of These Days
Money
Sheep

A Collection of Great Dance Songs is a compilation album by Pink Floyd released on 23 November 1981 on Harvest/EMI in the UK and Columbia Records in the United States.

The title is facetious, given that Pink Floyd is not known for making particularly danceable music. This is perhaps evidenced by the album art, which featured a photograph of ballroom dancers guyed to the ground so they cannot move....

The album contains alternate mixes of "Shine On You Crazy Diamond" (which comprises parts 13, 5 and 7) and "Another Brick in the Wall (Part 2)" (which combines the intro from the single mix with the album version which fades out during the "if you don't eat your meat" ending). Also, the track "Money" was re-recorded as Capitol Records refused to let Columbia Records in the U.S. use the track. David Gilmour re-recorded the track himself playing all of the drums, guitars, keyboards, bass guitar and vocals and co-producing the song with James Guthrie. Dick Parry reprised his saxophone role on the track. There are some slight differences between the re-recorded version and original, mainly in certain sections of the saxophone and guitar solos.

Pink Floyd - Wish You Were Here

One Of The Best Ballads ever! In 70's Rock Just a beautiful song ..

Pink Floyd - Another Brick in the Wall