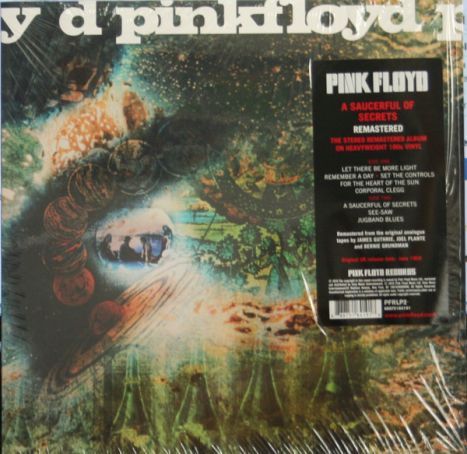 Made and Printed in the USA

In 1968, English rockers Pink Floyd were facing major problems. The band's first US tour was cancelled after guitarist/vocalist/songwriter Syd Barrett's dependency on hallucinogenic drugs were causing his behavior to become more erratic (on the band's first US TV appearance on American Bandstand, the group got through it unscathed but on The Pat Boone Show, Syd refused to mime to See Emily Play or speak to Pat), the band's third single Apples and Oranges failed and a proposed fourth single Vegetable Man was not ever released. Early in January 1968, drummer Nick Mason, keyboardist Rick Wright and bassist/vocalist Roger Waters called Syd's childhood friend David Gilmour and invited him to join making PF a five piece for five shows. Then, before what would have been the sixth gig as a five piece, Roger said let's not pick up Syd. After he left, the band recorded a fourth single It Would Be So Nice, which flopped and were also recording their second album A Saucerful of Secrets, released in July of 1968. The album starts off with Let There Be More Light, which has Rick singing and Roger whispering in unison on one part then David Gilmour singing the next part. The track ends with a soaring Gilmour solo (the first proper guitar solo on a Floyd track by the way). Next is Remember a Day, which was a holdover from Piper at the Gates and was written and sung by Rick with great slide guitar by Syd. Set the Controls for the Heart of the Sun follows and was written and sung by Roger and was Roger's first truly great song he wrote for the band and he performed it on his tours in 2000 and 2002. Next is Corporal Clegg with Dave and drummer Nick Mason on vocal(yes, it was Nick who sang the "he won it in the war", "in orange red and blue", "he's never been the same" and the "from her majesty" sections of the track). The second half starts with the group composed title cut which became a showstopper for the band for years to come and is a classic. Watch the version on Live at Pompeii and you'll agree. Rick's See-Saw follows and is a great song. Lastly, the album ends with Syd's Jugband Blues. The song is one of his best. The album was hugely ignored in the US but made it to #9 in the UK upon release in 1968.