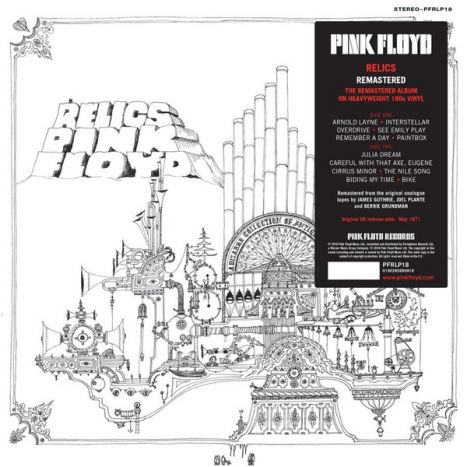 B1 Julia Dream
B2 Careful With That Axe, Eugene
B3 Cirrus Minor
B4 The Nile Song
B5 Biding My Time
B6 Bike

"Relics" is a collection of very early Pink Floyd singles and rare tracks, covering the band's first couple of years from 1967 to 1969. Consider it "Pink Floyd: The Early Years," if you like. Five tracks come from the group's first three albums: the classic, trippy instrumental "Interstellar Overdrive" and the half children's song/half freak-out number, "Bike" (both from "Piper At The Gates Of Dawn"), the breezy "Remember A Day" (from "A Saucerful Of Secrets"), and a pair of tunes from the "More" movie soundtrack: the eerie "Cirrus Minor," and the thunderous rocker, "The Nile Song." All superb stuff, but the main selling point of "Relics" are the six rare Floyd tracks that make up the remainder, such as the classic early singles "Arnold Layne" and "See Emily Play," both great little blasts of late-60's psychedelic pop, the jaunty "Paintbox," and the lovely, mysterious atmosphere of "Julia Dream." Also included is the original studio version of "Careful With That Axe, Eugene," an outstanding Floyd instrumental that's probably more famous in it's live version from the "Ummagumma" album. Although the live version of "Eugene" IS more monstrous and powerful, as the Floyd were able to slowly build it up and expand on it in concert, the slightly-faster studio version is nothing to sneeze at either, and the band give it a studio performance that's very impressive, skillful, and passionate.
And finally, there is what is quite possibly the happiest, most upbeat song in the entire Pink Floyd catalog, "Biding My Time." Although the song starts out softly, before long the band turn it into a full-throttle jazz-rock rave-up, complete with horn section! Sounds to me like the Floyd had a grand ol' time in the studio when they recorded this number, and it shows. Love it! Pink Floyd's "Relics" may indeed be, as the album cover says, "a bizarre collection of antiques & curious," but oh, is it good.

One is Barrett, awesome and poetic stuff, another one is Wright, emotive and inspirational music, another one is Mason, the abstract percussions that made people feel things they werent pretty sure what it was, we have gilmour too, his guitar full of energy, took Floyd to another path,