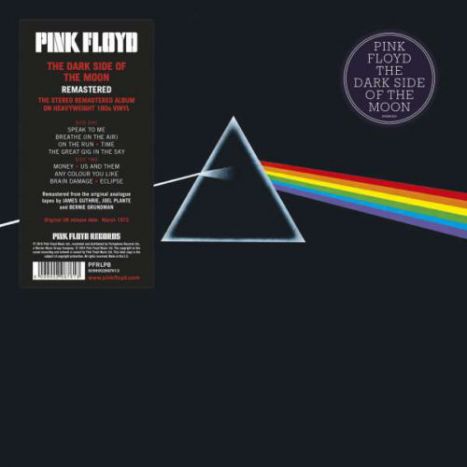 Pink Floyd - The Dark Side of The Moon

Dark Side of the Moon, originally released in 1973, is one of those albums that is discovered anew by each generation of rock listeners. This complex, often psychedelic music works very well because Pink Floyd doesn't rush anything; the songs are mainly slow to mid-tempo, with attention paid throughout to musical texture and mood. The sound effects on songs like "On the Run," "Time" and especially "Money" (with sampled sounds of clinking coins and cash registers turned into rhythmic accompaniment) are impressive, especially when we remember that 1973 was before the advent of digital recording techniques. This is probably Pink Floyd's best-known work, and it's an excellent place to start if you're new to the band.

By condensing the sonic explorations of Meddle to actual songs and adding a lush, immaculate production to their trippiest instrumental sections, Pink Floyd inadvertently designed their commercial breakthrough with Dark Side of the Moon. The primary revelation of Dark Side of the Moon is what a little focus does for the band. Roger Waters wrote a series of songs about mundane, everyday details which aren't that impressive by themselves, but when given the sonic backdrop of Floyd's slow, atmospheric soundscapes and carefully placed sound effects, they achieve an emotional resonance. But what gives the album true power is the subtly textured music, which evolves from ponderous, neo-psychedelic art rock to jazz fusion and blues-rock before turning back to psychedelia. It's dense with detail, but leisurely paced, creating its own dark, haunting world. no other record defines them as well as this one.the album set the all time record for longevity on the billboard charts.....


Product Description
The Dark Side Of The Moon, one of Pink Floyd's most highly acclaimed albums (over 38 million copies sold since its release)