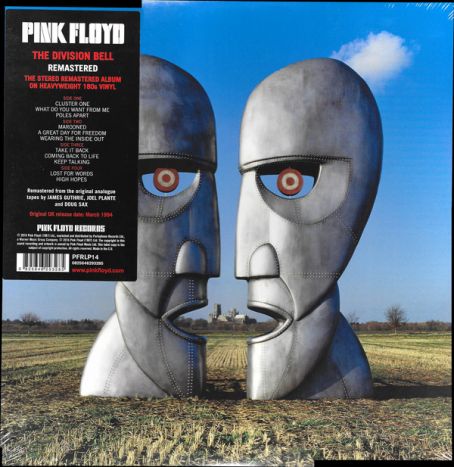 Pink Floyd's most recent album The Division Bell was released in April of 1994(two full months before I graduated High School). The album was the first since their 1987 comeback A Momentary Lapse of Reason. The band spent four years on the Momentary project recording and touring(the tour ended in 1990). The band were inactive in 1991 and spent 1992 putting together the Shine On box. It was during an American radio interview in late 1992 that guitarist/vocalist David Gilmour revealed that the band would finally begin work on a new album in 1993. David, along with drummer Nick Mason and a fully reinstated keyboardist Rick Wright(whom was a sideman on the Momentary Lapse album and tour) recorded The Division Bell throughout 1993 and January of 1994 at David's own houseboat studio The Astoria with David producing with Bob Ezrin.

When the album was released it was an instant smash hitting #1 in its first week and stayed put for four weeks in the Spring of 1994 whilst the band toured in support of the album and sold close to Four million in the US alone and many more worldwide. When I first put this album on, it reminded me of Wish You Were Here which is my favorite Pink Floyd album. This was the band's first theme album in years with its concept about lack of communication.

The opening Cluster One is a superb instrumental and one of their best ever. What Do You Want From Me sounds like Have a Cigar(pt. 2) and is a great song and Dave and Rick's music just being as great as ever. The haunting Poles Apart starts out being about Syd and his descent into madness while the second verse (Hey You!) addresses the demise of David's relationship with Waters and then ends with Gilmours own self doubts about where he stands in the grand scheme of Pink Floyd and realizing in the end that his own personal life and love is where he keeps his sanity grounded.

The Grammy winning instrumental Marooned is a lovely piece of music which is superb. A Great Day For Freedom talks about the fall of The Berlin Wall and the fall of one's relationships. Wearing The Inside Out is Rick's personal aside about his own exile both physically from the band and mentally and featured returning sax player Dick Parry whom last played on Wish You Were Here. Take it Back is the closest Floyd ever came to a love song. Coming Back to Life is Dave's song to his now wife Polly Samson whom brought him back to happiness after all the traumas with Roger and the demise of his first marriage to Ginger in 1990. Polly was actually proofreader to Dave's lyrics on The Division Bell and out of kindness gave her credit.

Keep Talking was the song that got loads of airplay on rock radio when released and sounds like classic Floyd from Dark Side and Wish You Were Here era Floyd. Lost For Words dealt with the demise and failed reconciliation with Waters. The closing High Hopes is the best Floyd track since Comfortably Numb which was about the things you gained and lost in life. The Division Bell is a great album and might possibly be the final album from the band. Although Dave said Floyd was done in 2001, he changed his stance in 2003 saying "Floyd still exists and will return one day but not tomorrow".Originally Recorded: 1994