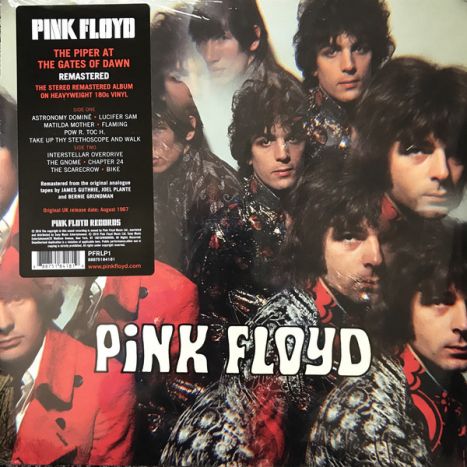 Pink Floyd ‎– The Piper At The Gates Of Dawn

A6 Take Up Thy Stethoscope And Walk

Made and Printed in the USA.

The only Pink Floyd recording based on the vision of founding singer-songwriter Syd Barrett, the psychedelic rock band's 1967 debut album, PIPER AT THE GATES OF DAWN, smashed the conventionality of the British Invasion with an avant-garde pastiche of trippy improvisation and snappy pop snippets.

The Piper at the Gates of Dawn is a very good album, very different from everything else the band put out. It contains mindblowing classics such as "Astronomy Domine" and "Lucifer Sam".

Early Floyd has some quality gems. Piper At The Gates Of Dawn has some really wonderful tracks. The first two tracks and Interstellar Overdrive are some of the best material Syd and Pink Floyd ever wrote

One is Barrett, awesome and poetic stuff, another one is Wright, emotive and inspirational music, another one is Mason, the abstract percussions that made people feel things they werent pretty sure what it was, we have gilmour too, his guitar full of energy, took Floyd to another path,

The 5 best albums by Floyd are Dark Side, The Wall, Wish You Were Here, Animals, then Piper in that order

man, play this today, it sounds wicked awesome, listening to this back then, people must have thought a UFO landed

Syd Barrett and Roger Waters is like the modern version of Mozart and Salieri...