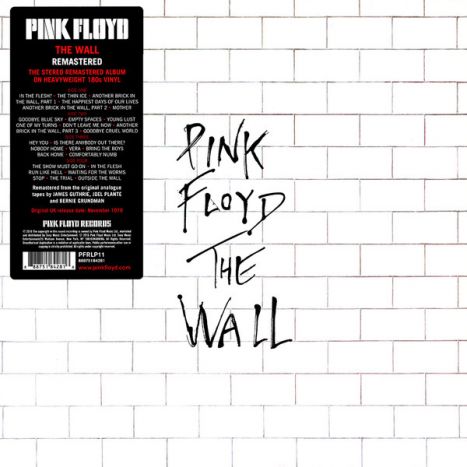 A2 The Thin Ice

A3 Another Brick In The Wall (Part 1)

A4 The Happiest Days Of Our Lives

A5 Another Brick In The Wall (Part 2)

B4 One Of My Turns

B5 Don't Leave Me Now

B6 Another Brick In The Wall (Part 3)

C2 Is There Anybody Out There?

C5 Bring The Boys Back Home

D1 The Show Must Go On

D2 In The Flesh

D4 Waiting For The Worms

D7 Outside The Wall

Though it in no way endangers the meisterwerk musical status of Dark Side of the Moon (still on the charts nearly seven years after its release), Pink Floyd's twelfth album, The Wall, is the most startling rhetorical achievement in the group's singular, thirteen-year career. Stretching his talents over four sides, Floyd bassist Roger Waters, who wrote all the words and a majority of the music here, projects a dark, multilayered vision of post-World War II Western (and especially British) society so unremittingly dismal and acidulous that it makes contemporary gloom-mongers such as Randy Newman or, say, Nico seem like Peter Pan and Tinker Bell.

The Wall is a stunning synthesis of Waters' by now familiar thematic obsessions: the brutal misanthropy of Pink Floyd's last LP, Animals; Dark Side of the Moon's sour, middle-aged tristesse; the surprisingly shrewd perception that the music business is a microcosm of institutional oppression (Wish You Were Here); and the dread of impending psychoses that runs through all these records -- plus a strongly felt antiwar animus that dates way back to 1968's A Saucerful of Secrets. But where Animals, for instance, suffered from self-centered smugness, the even more abject The Wall leaps to life with a relentless lyrical rage that's clearly genuine and, in its painstakingly particularity, ultimately horrifying.