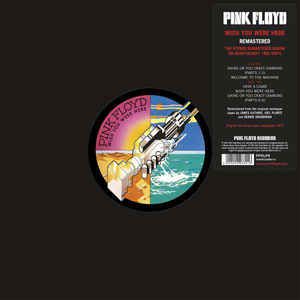 Pink Floyd - Wish You Were Here


Label: Harvest  SHVL 814, Capitol Records  5099902988016
Format: Vinyl, LP, Album, Reissue, Remastered
Pressed on 180g vinyl
Comes with printed inner sleeve, post card and the album is concealed in a black-coloured shrink-wrap (making the album art "absent". On the front of the shrinkwrap is a George Hardie designed sticker containing the album's logo of two mechanical hands engaged in a handshake.

A2 Welcome To The Machine

B1 Have A Cigar
Vocals  Roy Harper

B2 Wish You Were Here


Wish You Were Here is a song cycle dedicated to Pink Floyd's original frontman, Syd Barrett, who'd flamed out years before: two grimly funny songs about the evils of the music business ("By the way, which one's Pink?"), and two long, touching ones about the band's vanished friend.


The real star of the show, though, is the production: sparkling, convoluted, designed to sound deeply oh-wow under the influence--and pretty great sober too--with David Gilmour getting lots of space for his most lyrical guitar playing ever. And, though the album is big and ambitious, even bombastic, it somehow dodges being pretentious--the Barrett tributes are honest and heartfelt, beneath all the grand gestures and stereophonic trickery.

Pink Floyd - Welcome To The Machine

Pink Floyd's song reminds me of the opening titles to Metropolis, they sync well
Indeed, the topic of the song and the movie are quite similar, so the music used to express it is likely similar as well - one perhaps inspired by the other.