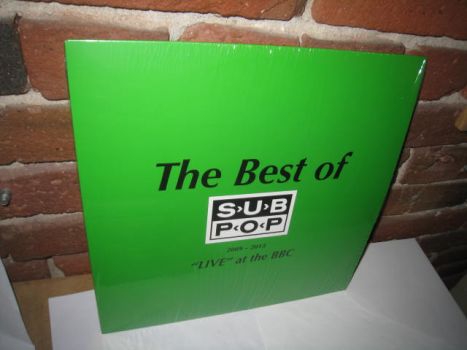 
B1 Cafeteria Food
B2 Teenage Adult

The New York Times acknowledged the band for "bring(ing) back 80s memories of hard, slovenly noise, when punk bands realized they could slow down and let their music fall apart a bit"; however, the article also observed the "aggressive, nasty" reaction of attendees at a 2008 show, who evidently were unprepared for Pissed Jeans sonics: the concert goers "started to huddle defensively on the sides," with "the columns of speakers on either side of the band...being used as something to hold on to. Average hipsters started to look like sailors clinging to a mast in a storm."

The Very Best of Sub Pop 2009-2013: Live at the BBC. The EP spans four tracks, collecting live versions of songs from the Pennsylvania punks' Essential 2013 effort, Honeys, and 2009's King of Jeans. The Very Best of Sub Pop 2009-2013 is limited to 3,000 copies worldwide.
More Information
Please sign in with your email address or Create an Account.
New Products
Compare Products
Compare
Clear All
You have no items to compare.
My Wish List
Last Added Items
Go to Wish List
You have no items in your wish list.
Vinyl Records Vancouver
Categories
Help
Quick Link
Newsletter