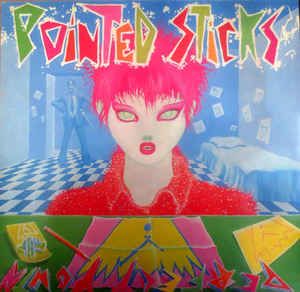 
This is the reissue "Perfect Youth" LP by Canadian punk rock legends The Pointed Sticks, rare original pressing released in 1980 on Quintessence Records This is the band that drummer Dimwit (Ken Montgomery) joined after quitting the Subhumans and before joining D.O.A.! On this record, the Pointed Sticks were vocalist Nick Jones, guitar player Bill Napier-Hemy, bass player Tony Bardach, Drummer Ken "Dimwit" Montgomery and keyboard player extraordinaire Gord "Dash Ham" Nichol. This record is one of the first jobs by now famed producer BOB ROCK, who went to work with Bon Jovi, Metallica and The Cult).

Great pop-punk with an edge, lots of catchy songs (including "The Witch", a Sonics cover!). Nicks nasally vocals, Bills crazy guitar riffs and Dashs catchy keyboard melodies: all the greatness of the Pointed Sticks can be found in that album!

There is also some guest appearances by saxophonists Johnny Feraro and Wayne Kozak as well as bass players Jim Bescott (who played for those other Vancouver legends The Young Canadians and The K-Tels) Ross The Boss Popenoe and Paul Blaney. The LP was produced, recorded and mixed by Bob Rock, assisted by Mike Fraser, at Little Mountain Sound in the fall of 1980. The LP features original artwork by another great Canadian punk rocker, Jim Cummins from The Braineaters and I, Braineater. When they recorded that LP, the Pointed Sticks were already famous in Canada and the U.S.A. from their four previous singles as well as many tours. They had attracted the attention of U.K. major label Stiff Records, on which they had released the "Out of Luck" 7 " and which had invited the band to the U.K. to record their debud album. The album was recorded but the deal fell apart and Stiff refused to release the finished album. The band had to come back to Canada and re-record the album in 1980 to release it on legendary Vancouver indie label Quintessence Records. They split about a year after releasing this record but they got back together in 2006!


Pointed Sticks - Out of Luck (Live)

Pointed Sticks - Out of Luck