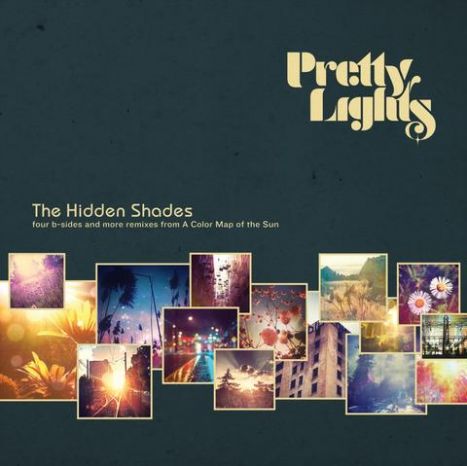 
Released in mid-April 2014, The Hidden Shades could be the best collection of B-sides eversupposedly assembled from B-sides of A Color Map of the Sun. Pretty Lights, a.k.a. Derek Vincent Smith, evidently experimented widely with that record since these tracks push in directions different than those of the previous album. These tracks play with more glitchy, modulated, almost harsh samples. Each track received a remix; each remix attests to the tracks unique sounds even if each mix cannot match the original quality. The Hidden Shades would be respectable as an EP in its own right. Pretty Lights does enough different things well to justify it even if it did not match A Color Map of the Sun. Few records can and this one is not a waste of time.

The first track, Lost and Found, is a great example of the soulful, funky, chill music that people love Pretty Lights for. Smith has a particularly good ear for brass instruments of which he samples more than one. The build-up to the drop runs evenly and smoothly. That makes the drop much softer which is in agreement with the chill trip-hop that Smith composes so well. This is the most recognizable track of his on the album as he deviates sonically less here. This is a solid contribution to the album.

New Moon Same Dark plays with glitch-hop which is not typical Pretty Lights. At the same time, the track has other features characteristic of Pretty Lights such as song structure and drop patterns. The track deviates yet stays true to Smiths style. Smith might wander a little too far in this track, but overall this track should be considered as organic growth from his trip-hop roots.

The following and third track, Starlit Skies has a similar sample selection. This track is much tighter with less long, repetitive sections and frequent transitions. Pretty Lights approaches industrial hip-hop here both with his modulated mechanical samples and his rap vocal samples. This is a hazy, dark, funky beast of a track. In terms of sounds, not quality, the ending is a silver lining in the otherwise dark, stormy cloud that the track is.

These prior two tracks both push in the direction of glitch-hop and industrial music. If they indicate anything, they show that Smith is constantly experimenting and attempting to perfect and develop his sounds. They are also pretty funky which always helps.

The remixes are interesting and diverse. The Odesza remix of Lost and Found puts a light, upbeat, airy spin on Smiths original funky, chill beats. The Love and Light remix of New Moon Same Dark also flips the original on its head and features some glitchy, funky beats of its own. At the same time, it maintains the integrity of the original song and remains respectfully recognizable and comparable to the original. The Starlit Skies(Emancipator Remix) is not bad, to say the least. What was a tight, dark, industrial track became a chill trip-hop track, like something from old school Pretty Lights.

The release has some strong B-sides and some solid remixes. The glitchier sample selection also shows that Pretty Lights is constantly reworking his sounds for better or worse. Any follow-up to A Color Map of the Sun will pale in comparison. The Hidden Shades maintains its complexion.