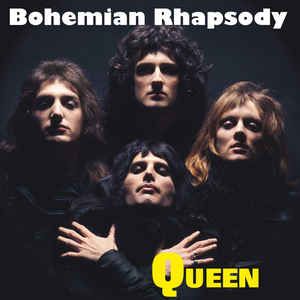 Released on the same day for Universal Music's 12 Days of Christmas campaign in the UK and Eire and Black Friday in North America.
Black Die-cut inner sleeve with plastic protection inside.
Made in the EU.

This pressing was released initially for the European market, but was also imported into the US and sold there, with the jacket's barcode covered by a sticker with a US barcode and cat# D002261911, which is part of the Hollywood Records-scheme, Queen's US labels. This label however is nowhere mentioned on the release.

Bohemian Rhapsody - Funny how no one actually says anything about this song. Everyone always says "everyone's heard this song" or "this is the most amazing thing ever." Well, maybe not everyone has heard this song and not everyone understands why it is so amazing. It therefore bears neccesity to be said. tTe introduction is freddie overdubbeed four times producing some lovely vocal harmonies. Then the piano line comes in which quickly becomes one of the greatest in rock history. Eventually we get to "mama just killed a man" part. This first verse is absolutely stunningly beautiful. Freddie's voice, the lyrics, bass, and piano all come together to form one of the most amazing products immaginable. The whole first and second verses are stunning - truly stunning. This is followed by another one of rock's most esteemed guitar solos courtesy of Mr. Brian May.


Instantly recognisable. Brian may had a terrific way of not just sticking a solo into a song. Rather he wrote a song to be the defining apex, to build upon the crescendo that had led up to it - and then to exceute. But the song is far from over. It then goes into probably the most ridiculous and crazy minute some odd in rock history. Over 128 vocal overdubs! Amazing harmonies! Finally this section boils over to the third section of the song, the rocking part. And it truly is queen rocking. They could do it and here it is proved. This part also has very strong lyrics. Finally Brian does a couple runs up his guitar and there's some more piano fanfare before it finally returns to a similar vibe from the first verse. The lyrics get quieter and quieter and eventually it's just some nice guitar tapping from brian and piano. At the very end it's just piano and Freddie singing "any way the wind blows" - and with a cymbol crash from Roger, it's all over. 12/10


The other heavy rocker is an ode to muscle cars. "I'm in Love with My Car" is a perfect cruising song with crunchy guitars and Roger Taylor's roaring vocal.

This song will last longer than Beethoven's songs..

FREDDY MERCURY IS "THE TALENT" OF LAST CENTURY.. beyond any doubts