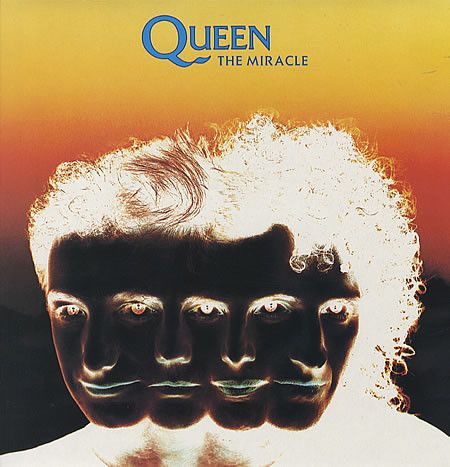 Record is VG++ has some light scuffs (listen to our copy)

Track A is taken from the album "The Miracle".
Tracks B1 and B2 are taken from the the Video "Rare Live" (MVP 99 1189 3)
Track B1 is recorded live at the Rainbow, London '74.
Track B2 is recorded live at Houston, Texas '77.
Made in EEC.
Marketed, manufactured and distributed by EMI.
En France: distribution exclusive EMI Pathé Marconi S.A.
Deutschland: EMI ELECTROLA GmbH, Köln.

The title track, The Miracle, is said to have originated from Mercury. It starts mellow as it talks about what things could be constituted as miracles; and one theme is that it would be a miracle if we could have peace on earth. John Deacon described the lyrics as “naive” in the sense that they’re a bit utopian. Musically, it’s a lot more melodic than some of the others on the album and towards the end there’s a cool tempo change. This song grows on you – if you couldn’t get into it at first, give it a few listens. You really appreciate the melody and the well-intentioned lyrics!