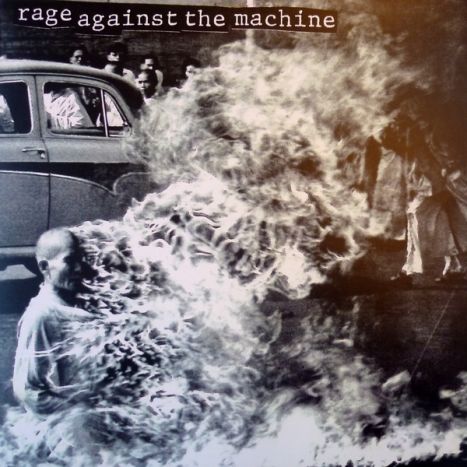 A5 Was Recorded Before Ever Playing Live.
No Samples, Keyboards Or Synthesizers Used In Making Of This Recording.


Someone once confessed their envy of Jimmy Page because he'd written *all* the good guitar riffs, leaving nothing for the rest of us. Well, Rage Against The Machine appears to have stumbled on Jimmy's secret stash of leftovers. But calling these riffs leftovers is doing them an injustice. Each is a behemoth of intensity and groove, while being surprisingly simple and eminently catchy. They form a solid foundation for each song, easily allowing the rest of the band to fall into lock-step formation when needed, but also allowing ample room for variation. And each song is made up of at least four or five of them, all as strong as the first, to create epic five-minute-plus "agit-pop" tunes.
When he's not anchoring the band with those regal riffs, Tom Morello is coaxing previously unheard of sounds from his Frankenstein guitar. "No samples, keyboards or synthesizers used in the making of this recording," claims the liner notes, and it's for Morello's offbeat work that this claim becomes necessary. Every fill and solo is unique, almost anti-guitar, in their sound. 'Bullet in the Head's solo begins with some echo-filled, mechanical sounding distortion. The solo on 'Know Your Enemy' could have been produced by a malfunctioning tape machine. 'Wake-Up' features a solo bathed in extreme echo and Frampton-style talk-boxing. Even his more conventional solos are enormous. 'Settle for Nothing' offers up some some languid jazz lines. 'Freedom' is a fine example of how tasty his playing can be when it's not trying to overwhelm you. And if you love Public Enemy-style sirens with your hip-hop, check out the variations Morello puts on that convention scattered throughout the album (most notably in his rhythm work on 'Fistful of Steel').

Bassist Timmy C gets several moments to shine as well. He slaps and pops the addictive intro to "Take the Power Back". Then, a lazy, loping 4-note theme serves as the delicate opening to "Settle for Nothing", before the heavens cave in ("Death is on my side... Suicide!"). On "Bullet in the Head", he provides a 7-note riff that's funky and confrontational (4-notes... 7-notes... See what I mean about simple and intense?).

Drummer Brad Wilk combines the skin-pounding intensity of a Dave Grohl, with the Caucasian funkiness of the Chili Peppers Chad Smith, and the hardcore speed of Faith No More's Mike Bordin. He is much more versatile than you'd think, sprightly riding the high-hat in one verse, crashing the cymbals in the next, and then shimmering through with a snare roll. Wilk's work on this album, to this day, is my favourite to air-drum to.

Frontman Zack de la Rocha may be focused (obsessed?) with social and racial injustice, so much so that those without his same political bent may feel excluded. But he's also aware enough of the power of a catchy rhyme to draw in those not in the choir, that he lays them out end to end through out the album ("Another funky radical bombtrack started as a sketch in my notebook / But now dope hooks make punks take another look" he raps on 'Bombtrack', essentially making this point for me). Zack raps with such passion and verve, and he has such a talent for succinct sloganeering, that he becomes the perfect frontman for this band of agitproppers. Witness his lyrics to 'Killing in the Name' (still my favourite track). The song starts with a distorted, almost Wagnerian, guitar overture. It settles into a quiet bass-guitar and cowbell section duet. And then the riff comes in. Finally, Zack begins to chant. And chant. And chant. He doesn't attempt to tell a story here, but instead just spouts slogan after slogan ("Now you do what they told ya", "F--- you I won't do what you tell me", etc.), repeating each over and over. It's the perfect song for a rowdy group of teenage boys to scream to. Which I suppose explains its enduring popularity.


Rage Against The Machine - Wake up


Rage Against The Machine - Freedom / Killing In The Name

great video, killing in the name of got too crazy for me to record, this concert was the shit, if you haven't seen Rage you need to go see them it is like nothing else