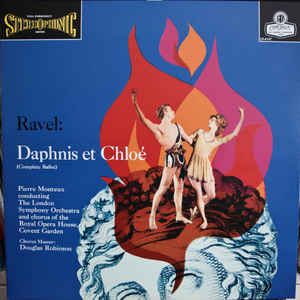 Pierre Monteux's magnificent account of Ravel's ballet Daphnis et Chloe with the London Symphony Orchestra is hands down one of the very best! In addition to Ravel's Daphnis et Chloe (1912), the proficient and classically trained violinist premiered Stravinsky's Petrushka (1911), The Rite of Spring (1913) and Debussy's Jeux (1913)! On this 180g 45RPM 2LP pressing you'll hear extraordinarily lush harmonies, pointed French phrasing, an absence of sentimentality, and an intuitive feeling for Ravel's meshing of classic-erotic. A true masterpiece for orchestra!

I am happy to report that the new Ravel "Daphnis and Chloe" London 45 rpm reissue, conducted by Monteux in a near classic performance, is perfect in every way and is more than outstanding sonically. Grundman gives it a wide, rich soundscape wholly appropriate to the magical reading of Monteux. More so than the Munch Daphnis of some years ago on Classic 33, which was also done by Grundman and sounds very good, Monteux brings out the primal elements of Daphnis and his reading is better suited to the wider dynamics afforded by the 45 rpm format.


"Monteux's interpretation fits the piece like a glove. Flowing tempos knit the orchestral fabric together effortlessly into the "choreographic symphony" of the work's subtitle, without stinting on atmosphere or sheer color. The opening is mysterious but not sluggish. Ravel's sunrise reaches a glorious apotheosis, with the choir well-balanced in the mix. The quicker bits have plenty of excitement and glitter." - Classics Today

"From the mysterious, exotic opening of the introduction, Monteux and the LSO capture the lushness and richness of the harmonies with an unbridled sense of French passion. The many different sections are linked through Ravel's subtle and delicate transitions; they achieve a real transparency under Monteux's clear hand... The clarity of the choral singing is excellent -- the frequently subtle changes of pitch, often lost in murkiness in other performances, are gently but clearly emphasized here with taste. Monteux, a violinist by training, compels his LSO string players to play Ravel's harmonics with a real core and edge to the sound, minus the usual French wispiness." -

Monteux was not a showy conductor, or a ruthless dictator of the podium like so many of his colleagues. Instead he believed in intensive rehearsals and precise, but refined, signals to convey his requirements during concerts. These features inevitably lead to fine performances and to his being generally admired and liked by his players.

This Daphnis is a wonderful example of the results of such an approach to music making. Everything is clear, well-balanced and draws to an exciting conclusion. Monteux's understanding of the score is simply without peer - after all, he gave the first performances of Daphnis along with Stravinsky's Rite, Petrushka and Nightingale and Debussy's Jeux for Diaghilev's Ballets Russes so had a deep inside knowledge of how this music should be performed on stage based on practical experience. The players give it their all. The remaining two pieces, the Rapsody and the Pavane share the same exalted standards.