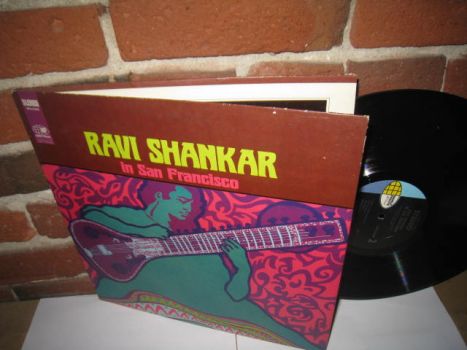 
B1 Dhun (Based On A Morning Raga In Sindhi Bhairavi) Tala Dadra 24:12

Flower Power did expose it to a much wider audience in the West, with the result that there are more people playing sitar and tabla than ever.

But sitar players like Ravi Shankar and tabla players like Alla Rakha, who plays on this album, are examples of lives of dedication and discipline to music which it takes to play music this wonderful. The ragas on this LP are beautiful, the playing is fantastic, and the improvisation and interplay between sitar and tabla is at its finest.

Tabla players will find a hidden gem on this LP - a tabla solo by Alla Rakha in a rhythmic cycle described by Shankar in his introduction as "rather uncommon" - a huge understatement, since it's an incredibly complex repeating cycle of 17 beats. Alla Rakha gives a virtuoso performance of improvisation, going off on deep forays into uncharted territory - but never losing his place in the original cycle. You have to hear this track.
More Information
Please sign in with your email address or Create an Account.
New Products
Compare Products
Compare
Clear All
You have no items to compare.
My Wish List
Last Added Items
Go to Wish List
You have no items in your wish list.
Vinyl Records Vancouver
Categories
Help
Quick Link
Newsletter