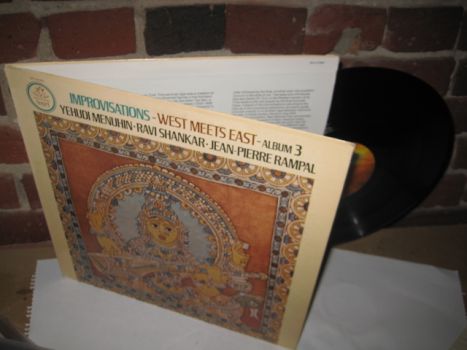 
When the first West Meets East record was first released in 1966 it set new standards of cross-cultural playing.


The violinist Yehudi Menuhin had first met the sitarist Ravi Shankar in 1952. It was at that meeting in New Delhi that Menuhin first heard Shankar play and Menuhin's life was transformed by an abiding love of a music seated in melody and rhythm. Menuhin and Shankar developed what would become a life-long friendship. In 1966 they played together at the Bath Festival in England


Menuhin's playing speaks with some Indian inflexion but the violin's voice is his.

The two musical structures intertwine and you are part. We hear the structure of western musical disciplines applied to Indian instruments. Shankar and Menuhin were very popular in their time.

Rarely can one hear such complex melodies and improvisation played so perfectly. These two individuals create memories with their love of each other's classical music styles. Jazz, classical, Indian, and world music lovers will all be thrilled by this collection of masterpieces