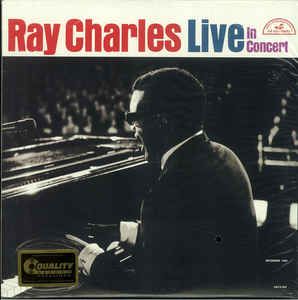 Remastered by Kevin Gray at Cohearent Audio, from the original analog tapes

"This 1965 release was recorded September 1964 at the Shrine Auditorium in Los Angeles, California. The set features the song "What'd I Say", which broke Ray Charles into mainstream pop music and sparked a new sub-genre of R&B. It earned Charles his first gold record and has been one of the most influential songs in R&B and rock 'n' roll history..

Brother Ray's best R&B hits such as "I Gotta Woman" and "What'd I Say," are framed brilliantly here alongside playful cuts like "Makin' Whoopee." Even better, the original Wally Heider recording positioned the musicians upfront, for a a great personal perspective. Hence, not only does Charles' piano assume lifelike imaging, but the band's support, including turns by saxophonist David "Fathead" Newman and the Raelettes, takes on three-dimensional qualities.

Made at Quality Record Pressings, this 200g LP magnifies the presence of the orchestra and the iconic vocalist and quiets down any interfering ambience"

Ray on piano and David 'Fathead' Newman's tenor sax are both featured on an instrument-only "Swing a Little Taste," then "I Gotta Woman" is introed with a Moonlight Sonata riff. He fingerpops throughout slow swingin' "Margie" and the band blasts powerfully in the break. Ray's bluesy take on the Eddy Arnold-penned "You Don't Know Me" is definitive in either the studio or this "live" version. Percy Mayfield's "Hide Nor Hair" is a soulful 4/4 lament in swing time.

"Baby Don't You Cry" has a fast Bossa Nova tempo. In Ray's capable hands, the album's longest track, the title piece from Flo Ziegfeld's 1929 Broadway musical WHOOPEE!, is laid back and ultra-cool. "Hallelujah" has the crowd clapping out time-- a superb rendering by all. The Raelets join in for the next two numbers. On "Don't Set Me Free," the band, w/Fathead soloing, blow fire. The almost obligatory "What'd I Say" has that familiar electric piano opening. Performed with passion and joy, this belies its oft-repeated status. "Finale" is the so-called Ray Charles Choir popping the Weasel.