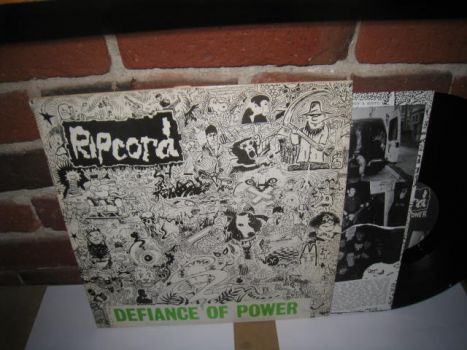 
B1 Drugshit
B2 Live By The Bomb... ...Die By The Bomb
B3 Furder
B4 Blind Eye
B5 Wicked
B6 Viviseccion - Tortura Innecessaria
B7 Defiance Of Power
B8 Prisoners


Now then, here's some more of that good ol' UKHC in full effect! It's Ripcord's first (mini?) LP on Manic Ears Records, 'Defiance Of Power' which stormed off the starting line with lung-bursting alacrity back in '87. They were attempting to compete for your attention by blazing up some fast-as-they-could hardcore festooned with generous helpings of gloriously cack-handed metallic chug-dung..


Coming on strong, like Heresy's cider lovin' cousins from the glorious South (coast) and in the end destined to follow a strangely similar trajectory in terms of style and subsequent implosion. Of course Baz went on to simultaneously flay the frets for Heresy not too long after this was released, reinforcing the mutual respect between the two groups. Both bands would tidy up their respective acts, opting for more of a clean-cut USHC informed style of high velocity noise worship to varying degrees of success.. But hey, this one's still nice and dirty!