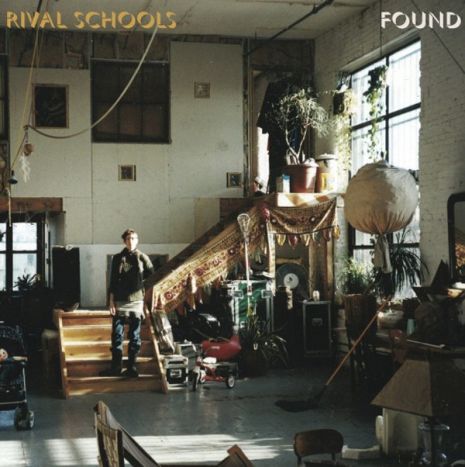 Pressing of 250 on 180 gram Coke Bottle Clear vinyl
Songs from the unreleased follow up to United By Fate.

The record shows that the band was beginning to move away from the pummeling metallic core of its sound on United and into something more subtle and melodic. This is probably what scared off the A&R flunkies at Island, who surely wanted to hear United by Fate again. Instead, they heard a band stripping back the guitar attack in favor of more angular, Fugazi-inspired riffing, songs that bore traces of time spent listening to shoegaze, and most of all a more melodic songwriting and vocal approach from Schreifels.

His singing is more nuanced and at times even a little sensitive, which isn't to say it wasn't powerful. Because it was. And so was the music.


Basically what the release of Found all these years later proves is that those A&R guys were completely wrong, and their meddling killed off a band that was on a path to become great.


Found is the rather appropriately titled new album for Post Hardcore outfit Rival Schools, yet its one that finds itself a little out of sync within their timeline. What is officially now album three (following 2011`s proper comeback Pedals) was originally meant to be album number two, the much awaited follow up to the bands striking debut United By Fate. But after in fighting, creative differences or whatever it was that caused Rival Schools to dissolve, the album was shelveduntil now.

If you were hoping to hear something that adhered more to the wirey, post hardcore guitar rattlings of the bands debut on Pedals then the opening half of Found will most definitely appeal to you. Obviously because of the time it was made, the Rival Schools that made a big chunk of Found were very much in the same creative space as the band that came out swinging back in 2011. Tracks like Paranoid Detectives and Disposable Heroes are based on musical DNA extracted directly from the sound Walter Schreifels and company were pushing at the turn of the new millenium. But you can also hear them in a more playful headspace too, there are lighter moments and the dynamics are more varied and encompassing. You even get a proto version of what would become Shot by Shot in the track Sophia Loren.

The second half of the album does dip a little bit in terms of intensity and engagement, but if your already an established fan of the band or the post hardcore scene in general then this probably wont be too much of a problem. I imagine after losing them for around a decade, most people who are board with the group will just be pleased to hear new/old material from them. I know that I am

In 2001 Rival Schools released there debut album United By Fate, which was met by praises from critics and fans. The group spent the next two years touring the world a few times over. Feeling some fatigue from the road, guitarist Ian Love decided to part ways and pursue solo endeavors. The group then recruited long time friend and musician Chris Traynor, (Orange 9mm/Helmet) and they spent a year writing and recording material in a few different studios around NYC. This body of work has since been leaked on the Internet in bits and pieces, with various made up song titles. These recordings have taken on a certain mystique among diehard fans and will finally see an official release. Titled Found, the eleven songs (including a Buzzcocks cover) have been re-mastered and will be available digitally as well as in limited color runs of 180 gram vinyl on April 9, 2013. The cover is a photo from one of the studios in Brooklyn that the band was working out of. In 2011, Rival Schools released Pedals, they spent the next few years touring the world, and have been working on new material for an upcoming release.