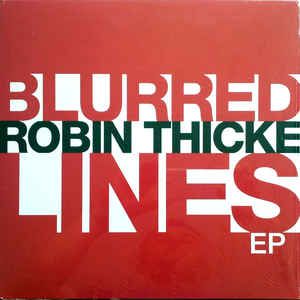 
A3 When I Get You Alone
Written-By  Robin Thicke, Walter Murphy 3:36

B1 Lost Without You
Written-By  Robin Thicke, Sean Hurley 4:14

One would be hard pressed to deny the elastic groove of "Blurred Lines," the Marvin Gaye-inspired uptempo romp which serves as the title track for Robin Thicke's new EP (and upcoming sixth full-length album). Armed with the insinuating production of Pharrell and a cameo rap by T.I., Thicke easily thumbs through an assortment of vocal stylingslaidback swagger, airy falsetto, and rhythmic riffing. While avid fans of the slick California crooner's signature slow jams and mid-tempo cruisers may initially feel a bit of shell-shock upon hearing him proclaim, "You the hottest bitch in this place" alongside T.I.'s spoken boast, "He don't smack that ass and pull your hair like that," most will probably enjoy the effortless sing-along quality of the song's hook as it fits like a glove over the percussive arrangement (modeled after Gaye's "Got to Give It Up").

summer-jam quality of "Blurred Lines" and Thicke's potent vocal delivery. This kind of fare is starkly contrasted by the other material on the Blurred Lines EPall lifted from Thicke's back catalog. Even 2009's overtly primal "Sex Therapy" is far more alluring in its sultry musical invitation: "It's your body/We can love if you want to...As hard as you want to/Soft as you want to." Likewise, the hot chick-chasing jones of 2002's "When I Get You Alone" (a feverish funk ditty which was criminally overlooked in North America upon its initial release) has a desperate nature about it which conveys carnal urges in a quirky and fun waywithout stooping to the near-exploitive manner of "Blurred Lines."

Lyrical diversions aside, the Blurred Lines EP effectively demonstrates the musical tenacity and authenticity for which Thicke has become revered over the past seven years. That's no easy feat for a mere six-tracker; but perhaps its that very brevity that makes the underlying qualities of his material so evident. Whether its the juxtaposition of lush, Prince-tinged cooing against Polow da Don's hip-hop-savvy beat structure on "Sex Therapy," or the combination of Philadelphia International-styled arrangements and jazzy verses on 2008's "Magic," Thicke consistently finds an ideal balance between classic and contemporary in his song structure and interpretation. Ideal proof of this savvy methodology is found ever so smoothly in his 2007 breakthrough hit, "Lost Without U." The lightly strumming guitars provide a perfectly nuanced complement to the serene, sometimes whispered vocal melodies, while the boldly shy tale of devotion and sensuality draws memories of classic Isley Brothers candorwith just the right dose of 21st-century hipness.

The most surprising selection on the Blurred Lines EP is the aforementioned "When I Get You Alone," a hit throughout Europe in 2003 which finally gained notoriety stateside in 2007 when American Idol contestant Blake Lewis performed it during the final rounds of the show's sixth season. Quite possibly the most naturally hooky tune found amidst all of Thicke's repertoire to date, "Alone" builds upon the structure of Walter Murphy's 1976 disco instrumental piece, "A Fifth of Beethoven," with a fiery chorus and decidedly urban-contemporary beat programming. Thicke's energetic take on the verses and passionately direct chorus evokes shades of Thriller-era Michael Jackson, but with a twist of street-savvy edginess. This assertive accession is far removed from the considerably understated technique employed in his subsequent work (even "Blurred Lines"), but is equally strong in impact.

All in all, Thicke's Blurred Lines EP is a solid glance at a decade of work from a soulful artist who might not always shatter sales records, but who bravely challenges the myth that classic soul and contemporary R&B cannot seamlessly coexist. The lyrical shortcomings of the set's new title track are hopefully only a temporary break from the more prominent, high-quality writing found on the remaining materialand not an indicator of a new direction to be pursued on the upcoming Blurred Lines album.


Robin Thicke - Lost Without You

Robin Thicke - When I Get You Alone (Music Video