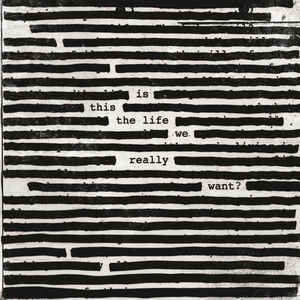 Roger Waters ‎– Is This The Life We Really Want?

Comes in a gatefold cover, inner sleeves with lyrics.

To be fair, Waters was ahead of the curve in lamenting our attachment to media saturation on *Amused to Death—*modern life has basically become what that album anticipated. So it makes sense that Is This the Life answers back with a plea for sanity. And to his credit, much of it comes across as both sincere and necessary—albeit draped in Waters’ habit of being preachy and pedantic. (Two years ago, he described the new material as his way of sending humanity a mediocre report card.)

Yes, the radio-style announcements at the top of “The Last Refugee” would indicate that Waters hasn’t stretched much beyond his now-predictable arsenal of sound effects. The same goes for its languid drumbeat. The album even calls Godrich into question—tunes like “The Last Refugee” and “Is This the Life We Really Want?” are sometimes hard to tell apart from Sea Change-era Beck. Godrich and Waters didn’t push each other to break new ground as much as one might have hoped. But “The Last Refugee,” with its images of lovers lying “Under lemon tree skies” and “Dreams/Up to our knees/In warm ocean swells,” also shows that Waters has grown into an evocative poet—that is, when he isn’t spelling out his message on songs like “Picture That.” “Picture your kid with his hand on the trigger,” he sings, “Picture prosthetics in Afghanistan.” Then again, it’s hard to argue with a verse like “Picture a shithouse, with no fucking drains/Picture a leader, with no fucking brains.”

Waters’ predictability doesn’t diminish his effortless songwriting, and Is This the Life We Really Want? presents his tightest, most focused songs since the mid-’70s. “Wish You Were Here in Guantanamo Bay,” he sings on “Picture That.” The first letters of the phrase are capitalized in the lyric sheet, a sly nod to both the popular tourist postcard and, of course, to the Pink Floyd song and album of the same name. Even casual fans will spot Waters’ hint of the old melody right away. Is This the Life’s myriad sonic references to his work with Pink Floyd suggest that Waters is comfortable with his past. The more you accept how much his past reflects in his present, the more receptive you’ll be to this album’s charms."