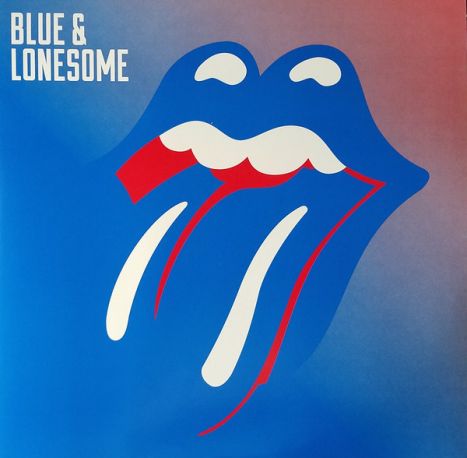 Both records and sleeve are made in France.

"All Of Your Love"
Published by Conrad Music / Lerie Music Inc.

"Everybody Knows About My Good Thing"
Published by Respect Music Co.

"Ride 'Em On Down"
Published by Conrad Music.

"Just Like I Treat You", "I Can't Quit You Baby"
Published by Hoochie Coochie Music.

( pitchfork) "But Blue & Lonesome represents more than just a back-to-basics mission, It’s the most honest music the Stones have released in years—not because the source material confers it with the patina of authenticity, but because the entire blues-covers concept is a tacit admission that they don’t really give a shit about being a contemporary concern anymore, so they’re just going to do something that feels good. (The record was reportedly spawned as a warm-up exercise for a postponed album of new material.) And now that the band are older than Muddy Waters or Howlin’ Wolf ever lived to be, they can fully inhabit the grizzled-bluesman archetype to which they've always aspired, and exude a genuine get-offa-my-lawn imperviousness to the modern world.

Blue & Lonesome was bashed out in three days, and for the first time in eons, the Stones sound like a band playing together in the same room rather than one that travels on separate jets. Jagger is, naturally the star of the show—but not in his usual vampish ways. Whether he’s embodying the down-on-his-knees despair of Memphis Slim’s title track or playfully assuming the role of sad-sack cuckold on Little Johnny Taylor’s “Everybody Knows About My Good Thing,” his ageless voice sounds like it’s emanating from the middle of the band scrum rather than the lip of a catwalk. And while Chicago blues may have introduced the concept of jamming and guitar gods to the rock lexicon, Richards and Ronnie Wood’s grinding interplay ultimately plays a supporting role to Jagger’s harmonica honks, which cut through these songs like a rusty hacksaw with “Midnight Rambler”-worthy gusto.

But as much as Blue & Lonesome plays it raw, it’s not all that raucous—the energy here is less rip-this-joint than rocking-chair steady. On paper, the idea of the Stones running roughshod over a set of classic blues tunes seems like a long-suffering fan’s dream. (The “best Stones album since Some Girls!” headlines practically write themselves.) However, what made the Stones the Stones wasn’t their purism—it was the sacrilegious impulse to corrupt their influences with their own singular swagger. But Blue & Lonesome is more about adhering to tradition than encouraging sedition. The Stones may be drinking from their fountain of youth here, but they’re content to just savor it rather than spit it back in our faces.

On their best blues covers—Beggars Banquets’ “Prodigal Son,” Sticky Fingers’ “You Gotta Move,” Exile on Main Street’s “Shake Your Hips”—the Stones handled the songs like Ouija boards; they were less about paying homage to their heroes than channeling their sinister essence. Blue & Lonesome has flashes of that insidious inspiration: On the revved-up run through Howlin’ Wolf’s “Commit a Crime,” Jagger’s vocal oozes with implied violence overtop a repetitive, trance-inducing riff that rings like a police siren; on Little Walter’s “Hate to See You Go,” his pained baby-please-don’t-go pleas climax with an extended harmonica drone that threatens to swallow the song whole."