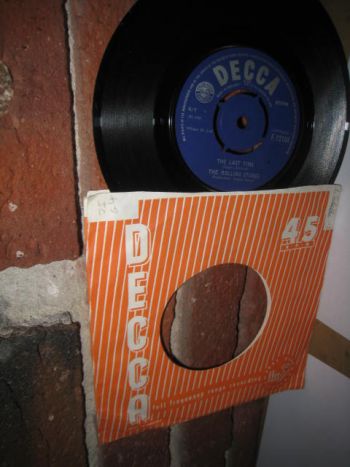 
A The Last Time


B Play With Fire

It was the band's third UK single to reach No. 1 in the UK Singles Chart, spending three weeks at the top in March and early April 1965. It reached No.2 in the Irish Singles Chart in March 1965. "The Last Time" was recorded at RCA Studios in Hollywood, California in January 1965.

Footage still exists of a number of performances of this song by the Rolling Stones in 1965: from the popular BBC-TV music show Top of the Pops, the 1965 New Musical Express Poll Winners Concert and American TV shows including The Ed Sullivan Show, Shindig! and The Hollywood Palace. A full live performance is also prominently featured in the 2012 re-edit of the 1965 documentary Charlie Is My Darling. The footage establishes that the distinctive guitar riff was played by Brian Jones, while the chords and guitar solo were played by Keith Richards.

A fan favourite and popular song in the Stones' canon, it was regularly performed in concert during the band's 1965, 1966 and 1967 tours. It was then left off their concert set lists until 1997-98, when it reappeared on the Bridges to Babylon Tour. It would later appear on some of the band's setlists in 2012-13 on the 50 & Counting tour.

Although the song is credited to Mick Jagger and Keith Richards, Richards has mentioned that it was based on a traditional gospel song called "This May Be The Last Time", recorded by The Staple Singers in 1955.


"Play with Fire" is credited to Nanker Phelge, a pseudonym used when tracks were composed by the entire band, even though lead singer Mick Jagger and guitarist Keith Richards are the only Rolling Stones to appear on the track. The song was recorded late one night in January 1965 while the Stones were in Los Angeles recording with Phil Spector at the RCA Studios. Richards performed the song's acoustic guitar opening while Jagger handled vocals and tambourine (enhanced using an echo chamber). Spector played bass (actually a tuned-down electric guitar), and Jack Nitzsche provided the song's distinctive harpsichord arrangement and tamtams. The Stones left for a tour of Australia the following day.

The song's lyrics talk of the singer's relationship with a high society girl, disparaging the lifestyle much in the same way that "19th Nervous Breakdown" would in a more up-tempo feel. The title refers to the idiom "If you play with fire, you will get burned".

In a 1995 interview with Jann Wenner for Rolling Stone, titled "Jagger Remembers", Jagger said, "'Play with Fire' sounds amazingwhen I heard it last. I mean, it's a very in-your-face kind of sound and very clearly done. You can hear all the vocal stuff on it. And I'm playing the tambourines, the vocal line. You know, it's very pretty." An unreleased version of the song, entitled "Mess with Fire", was also recorded. It featured a much more upbeat, soul-oriented feel.

The song was performed in concert during the Rolling Stones' tours of 1965 and 1966, and was revived on their 1989-90 Steel Wheels/Urban Jungle Tour.

An extended live version can be found on the 1974 release Live 'n' Kickin' by West, Bruce and Laing.

"Play with Fire" was featured in the 2007 film The Darjeeling Limited, directed by Wes Anderson; it also appears on the soundtrack album.

In July 2008, "Play with Fire" became the subject of a lawsuit when ABKCO Music Inc., which owns the rights to the Rolling Stones' early catalogue, filed a suit against Lil Wayne, asserting that the rapper's song "Playing With Fire" is based on the Rolling Stones' song.

In May 2011, "Play with Fire" was featured prominently in the season 6 finale of the show Supernatural.

The song is playable in the music video game Rocksmith.

The Rolling Stones - Play With Fire 1965