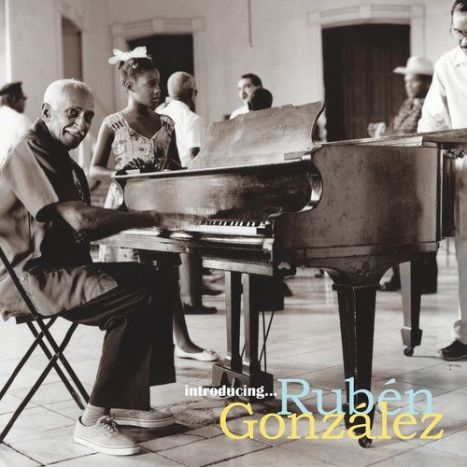 A1 La Engañadora
A2 Cumbanchero
A3 Tres Lindas Cubanas

B1 Melodía Del Rio
B2 Mandinga
B3 Siboney

Rubén had the essence of cuban spirit, that'swhy he played with such talent. The fact is that music is a feeling not a merchandise.

( amazon customer) " Ruben Gonzalez isn't just some geriatric has-been who people are showing sympathy for due to his age -- the man would still be considered a stunning musician if he were 30! (he's 81, by the way). His command of the piano is breathtaking. Ry Cooder was right in his liner notes...Ruben sounds like a cross between Thelonious Monk and Felix the Cat. The music is sumptuous and Ruben's hands glide across the keyboard with utter grace."

" . When you listen to him either pounding out or softly lifting notes off the piano keys, feelings of excitement, nostalgia, appreciation, comfort, and reflection can all rise to the surface. His skill is difficult to match; his love of music nearly impossible to emulate. Ruben Gonzalez "is" the music he creates and plays...a living example of the musical past re-introducing itself to the ever-emerging present."