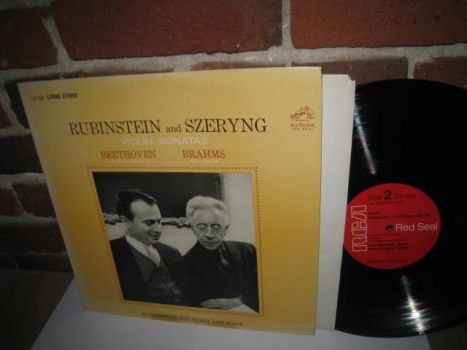 
Composed By  Johannes Brahms (tracks: B1 to B3), Ludwig Van Beethoven (tracks: A1 to A3)
Piano  Artur Rubinstein
Violin  Henryk Szeryng


Arthur Rubinstein received his early training as a musician in a manner totally foreign to today's young students. His early teachers were Joseph Joachim (a friend of Brahms) and Heinrich Barth. He was permitted by his teachers to give occasional performances, required to attend concerts, and played through the chamber repertoire with his fellow students. This is in contrast to the current generation which is consigned to the practice rooms of crowded conservatories (virtuoso factories, actually) and bred to win competitions, often at the expense of true musical developement.


As a result, Rubinstein was able to make the crossover between stunning virtuoso performances, and communicative chamber music appearances.
Henryk Szeryng first performed with Rubinstein in the 1950s. Immediately, their musical chemistry evolved into friendship, and it is this atmosphere which suffuses all of their recorded performances.


There is a give-and-take in these performances which recalls the great chamber music recordings of Rachmaninoff and Kreisler. One never gets the sense that Rubinstein and Szeryng are trying to "one-up" each other. Everything is in perfect balance. Rubinstein loved Brahms, approached him as a living composer, and the result is performances which continue to inspire decades later.

back in the 50s when it first came out. It's a great pity they never recorded all the Beethoven sonatas (at least that I know of) because the sense of ensemble musicianship is here at its highest. You have the aged Rubinstein teaming up with the (then) fairly young Henryk Szerying, surely one of the great violinists of his time (listen to that sense of pitch!) on some of the greatest violin-piano music ever written. This is a partnership of equals which exhibits the "balanced passion" that is apparently the hallmark of a bygone era, a kind of golden age between the sentimentalizing early years of the 20th century and the grandstanding virtuosity of the 21st (are we there yet?). If you're looking for the "real" Beethoven of these sonatas look no further.

Henryk Szeryng was one of the greatest violinists of the 20th century. But his budding career was interupted by WW II and for several years after that war he disappeared from the international concert scene and instead taught violin in Mexico City. Fortunately, he was discovered there by Rubinstein during one of his concert tours. After hearing Szeryng play, Rubinstein pronounced him to be one of the greatest violinists in the world (a highly accurate assessment) and arranged with RCA to record this set of sonatas to enable Szeryng to gain the exposure he so richly deserved.
Quite frankly I have never been an ardent fan of Rubinstein's playing, but I am deeply grateful to him for having rescued this great violinist from undeserved obscurity. Apart from serving as Szeryng's recording debut on a major label, these performances are outstanding. On these performances, I am a Rubinstein fan; the collaboration between Szeryng and Rubinstein is almost intuitive and quite wonderful to hear. No matter what other recordings you may have of these sonatas, please treat yourself to these.

This is a marvelous recording. The young master Szeryng and the old master Rubinstein in a delightful musical dialog--obviously having a lot of fun tossing the music back and forth to each other.

But Szeryng and Rubinstein make it new and fresh again. I find it interesting how they handle the score, ignoring some repeats and inventing others of their own. The effect is good. I think Beethoven would not object.

One of the great musical tragedies of the 20th century is that the young Szeryng was shunted out of public view by the circumstances surrounding the war and never was given adequate opportunity to present his talent to a wider public. Another great tragedy is that this album is hard to find. Hunt for it, and grab it wherever you find it, no matter how much it costs.