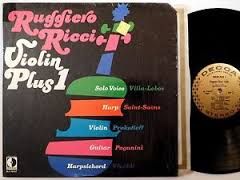 
Ruggiero Ricci (July 24, 1918  August 6, 2012) was an American violinist known for performances and recordings of the works of Paganini.

Ruggiero Ricci, violinist and teacher and last of a golden age of violinists such as Yehudi Menuhin and Jascha Heifetz, has died of heart failure in California, aged 94.

Son of Italian immigrants, Ricci was born in San Bruno, California in 1918. Although his family was a musical one, none of his many siblings reached the same heights as Ruggiero, who was quickly seen to be particularly talented and ultimately sent for lessons with the famous teacher, Louis Persinger (who was also teaching Yehudi Menuhin at that point).

Described by some critics and concert-goers of the time as a young genius, Ricci played his first solo recital (one of around 6,000 he was to play over the course of his career, in 65 countries) at the Carnegie Hall at the age of 11, shortly after giving his first orchestral performance in London of Mendelssohns Violin Concerto. Although he found widespread fame as a child prodigy the experience for Ricci was not a happy one; he described himself as a very lonely child (I could play eight different versions of solitaire, he said) and his career entered what turned out to be a long wilderness period before he was even a teenager