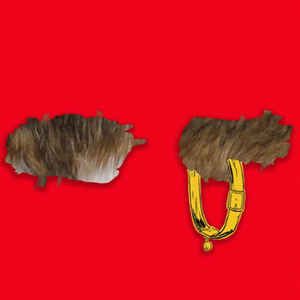 One-time pressing in a gatefold sleeve with a faux fur cover, housed in an outer die-cut slipcase. Packaging also includes a hand-drawn poster and a Meow the Jewels sticker sheet.
Barcode and Other Identifiers

Just over a year after Run the Jewels revealed plans to turn their acclaimed 2014 LP Run the Jewels 2 into the cat-sampling remix album, El-P and Killer Mike have made good on their promise as Meow the Jewels is out now as a free download. "Did we make the silliest, occasionally most grating possible remix album? Of course. And we did it for you, Mike Brown and Eric Garner," El-P tweeted after announcing Meow the Jewels' arrival.


El-P and Killer Mike Run the Jewels: How 2014's Brashest Duo Came Back »
The literal pet project came after a Run the Jewels fan launched a fundraising Kickstarter campaign to convince the duo to remix their Run the Jewels 2 using cat samples. El-P soon aligned with the Kickstarter, tweeting in September 2014, "By the way if Meow the Jewels gets funded I will donate all money to charity. True story." After the rapper announced that he wanted the funds to go to charities benefitting the families of Michael Brown and Eric Garner, the Kickstarter quickly soared past its $45,000 goal and Meow the Jewels was born.


Once Meow the Jewels was officially confirmed, a slew of notable producers and artists offered their remixing talents for the project, with Prince Paul, the Alchemist, Dan the Automater, Boots, Just Blaze, Portishead's Geoff Barrow, Zola Jesus and Massive Attack's 3D among those who helped transform the Run the Jewels 2 tracks. Internet celebrity cat Lil Bub appropriately partners with Snoop Dogg on opening track "Meowpurrdy," a play on RTJ2's "Jeopardy." "Close Your Eyes (And Count to Fuck)" is now "Close Your Eyes and Meow to Fluff," while RTJ2 closer "Angel Duster" has become "Angelsnuggler."

Previously released 'Meowrly', adds enthusiastic and rhythmic purrs to the BOOTS-produced RTJ2 track 'Early', without going overboard, while 'Close Your Eyes and Meow To Fluff', takes an album favourite and creates a parody of itself, while still maintaining the same eccentric energy as the original.